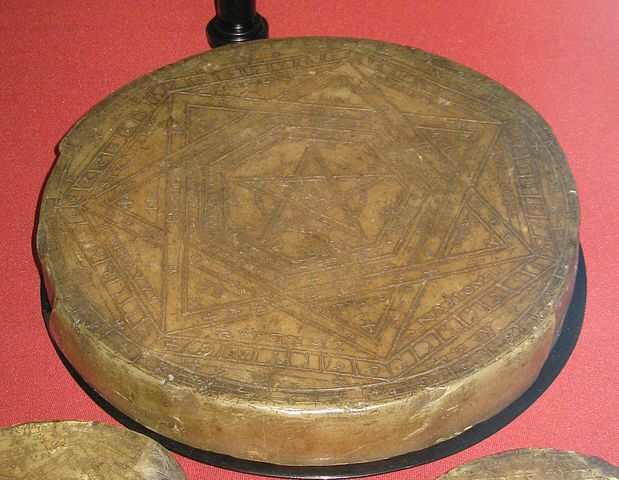 Enochian magic is a system of ritual magic based on the 16th-century writings of John Dee and Edward Kelley using information delivered to them directly by various angels. Dee's journals contain the record of these workings, the Enochian script, and the tables of correspondences used in Enochian magic. Dee and Kelley believed their visions gave them access to secrets contained within the Book of Enoch.

John Dee and Edward Kelley connected to the angelic realm by scrying into reflective surfaces and performing ritual evocations of the angels. During each scrying session, Kelley dictated what was told to him by the angel messengers while Dee wrote down his statements. Their information may be considered divine revelations, as it instituted a completely new form of ritual magic which had no root in previous traditions of ceremonial magic.

The Mysteriorum Libri Quinque was constructed from John Dee's diary spanning the period of 22 December 1581 – 23 May 1583. It describes many of the core tenants of the Enochian magical system as well as detailed instructions for performing the magical workings. This text includes descriptions of the furniture of a proper Enochian temple; the Seal of God (Sigillum Dei Aemeth); how to make the Tables of Light; the Great Circle and corresponding Collected Table of 49 Good Angels; the Mystic Heptarchy and the Tables of Creation; the Angelic Alphabet and the beginning of Loagaeth. There are two transcripts of this manuscript available today: one by Joseph Peterson and another by C. L. Whitby.

The Liber Logaeth (Book of the Speech of God), written by Edward Kelley, is composed of 73 folios containing 96 complex magical grids of letters. It is from Liber Logaeth that Dee and Kelley derived the 48 Calls or Keys, in which are concealed the keys to the Mystical Heptarchy, a related magical work by Dee. The only known copy is preserved in the British Museum. The correct spelling is Loagaeth, but it has been so frequently printed as Logaeth that this spelling is in common use.

Use by the Golden Dawn

Little was known of Dee's work until it was rediscovered by Samuel Liddell MacGregor Mathers of the Hermetic Order of the Golden Dawn in the 1880s. This led to Mathers developing the material into a comprehensive system of ceremonial magic. Magicians invoked the Enochian deities whose names were written on the tablets. They also traveled in their bodies of light into these subtle regions and recorded their psychic experiences. The two major branches of the system were then grafted on to the Adeptus Minor curriculum of the Golden Dawn.

According to Aleister Crowley, the magician starts with the 30th aethyr and works up to the first, exploring only so far as his level of initiation will permit.

Compared to other magical systems, Enochian magic is very complex. One of the difficulties is that many of the source documents are missing, and those that exist are sometimes fragmentary. Parts of the surviving manuscripts written by Dee have been lost. Paul Foster Case postulated that Dee and Kelley's system was partial from the start, an incomplete system derived from an earlier and complete Kabbalistic system.

Another difficulty is the use of the Enochian language for the invocations. Magicians see the correct pronunciation of the Enochian letters, words, and calls to be integral to magical success in utilizing the Enochian system - the letters must be memorized and their pronunciations learned. Fortunately, there have been several compilations of Enochian words made to form Enochian dictionaries, which can act as a handy reference. Authentic pronunciations, according to the Hermetic Order of the Golden Dawn usage, are given by Israel Regardie in a set of Golden Dawn instructional CDs.