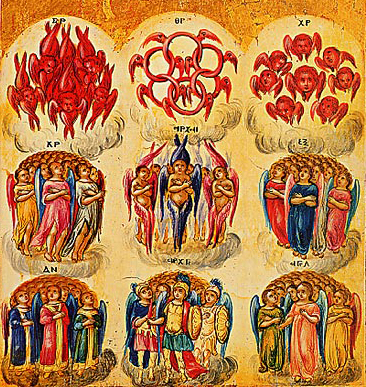 Depiction of the nine choirs of angels

An angel is a supernatural spiritual being who, according to various religions, is God's servant.

Abrahamic religions often depict angels as benevolent celestial intermediaries between God (or Heaven) and humanity. Other roles include protectors and guides for humans, and servants of God. Abrahamic religions describe angelic hierarchies, which vary by religion and sect. Some angels have specific names (such as Gabriel or Michael) or titles (such as seraphim or archangels). Those expelled from Heaven are called fallen angels, distinct from the heavenly host.

Angels in art are usually shaped like humans of extraordinary beauty.

The word angel arrives in modern English from Old English engel (with a hard g) and the Old French angele. Both of these derive from Late Latin angelus, which in turn was borrowed from Late Greek ἄγγελος angelos (literally "messenger"). Τhe word's earliest form is Mycenaean a-ke-ro, attested in Linear B syllabic script. According to the Dutch linguist R. S. P. Beekes, ángelos itself may be "an Oriental loan, like ἄγγαρος (ángaros, 'Persian mounted courier')."

The rendering of "ángelos" is the Septuagint's default translation of the Biblical Hebrew term malʼākh, denoting simply "messenger" without connoting its nature. In the Latin Vulgate, this meaning becomes bifurcated: when malʼākh or ángelos is supposed to denote a human messenger, words like nuntius or legatus are applied. If the word refers to some supernatural being, the word angelus appears. Such differentiation has been taken over by later vernacular translations of the Bible, early Christian and Jewish exegetes and eventually modern scholars.

Angels (Hebrew: מלאך mal'ach "messenger") are understood in Judaism through interpretation of the Tanach and in a long tradition as supernatural beings who stand by God in heaven, but are strictly to be distinguished from God (YHWH) and are subordinate to him. Occasionally, they can show selected people God's will and instructions. In the Jewish tradition they are also inferior to humans since they have no will of their own and are only able to carry out one divine command.

According to Rabbinic Judaism, the angels have no bodies, but are eternally living creatures created out of fire and occasionally appear in Midrashim as competition with humans. Heavenly beings, strictly following the laws of God, become jealous of God's affection for man. Humans, by following the Torah, in prayer, by resisting evil instincts (yetzer hara) and by Teshuva, are preferred to the flawless angels. As a result, they are also inferior to humans in the Jewish tradition. In the Midrash, the plural of El (Elohim) used in Genesis in relation to the creation of human beings is explained by the presence of angels: God therefore consulted with the angels, but made the final decision alone. This story serves as an example, teaching that the powerful should also consult with the weak. God's own final decision highlights God's undisputable omnipotence.

In post-Biblical Judaism, certain angels took on particular significance and developed unique personalities and roles. Although these archangels were believed to rank among the heavenly host, no systematic hierarchy ever developed. Metatron is considered one of the highest of the angels in Merkabah and Kabbalah mysticism and often serves as a scribe; he is briefly mentioned in the Talmud and figures prominently in Merkabah mystical texts. Michael, who serves as a warrior and advocate for Israel,(Daniel 10:13) is looked upon particularly fondly. Gabriel is mentioned in the Book of Daniel (Daniel 8:15–17) and briefly in the Talmud, as well as in many Merkabah mystical texts. There is no evidence in Judaism for the worship of angels, but there is evidence for the invocation and sometimes even conjuration of angels.

According to Kabbalah, there are four worlds and our world is the last world: the world of action (Assiyah). Angels exist in the worlds above as a 'task' of God. They are an extension of God to produce effects in this world. After an angel has completed its task, it ceases to exist. The angel is in effect the task. This is derived from the book of Genesis when Abraham meets with three angels and Lot meets with two. The task of one of the angels was to inform Sara and Abraham of their coming child. The other two were to save Lot and to destroy Sodom and Gomorrah.

Depiction of the Kabbalistic angel Ielial

Christians inherited Jewish understandings of angels, which in turn may have been partly inherited from the Egyptians. In the early stage, the Christian concept of an angel characterized the angel as a messenger of God. Later came identification of individual angelic messengers: Gabriel, Michael, Raphael, and Uriel. Then, in the space of little more than two centuries (from the 3rd to the 5th) the image of angels took on definite characteristics both in theology and in art. Ellen Muehlberger has argued that in late antiquity, angels were conceived of as one type of being among many, whose primary purpose was to guard and to guide Christians.

Angels are represented throughout the Christian Bible as spiritual beings intermediate between God and men: "Yet you have made them [humans] a little lower than God, and crowned them with glory and honor." (Psalms 8:4–5). Christians believe that angels are created beings, based on (Psalms 148:2–5; Colossians 1:16). Greek translations of the Hebrew Bible refer to intermediary beings, as angels, instead of daimons, thus giving raise to a distinction between demons and angels. In the Old Testament, both benevolent and fierce angels are mentioned, but never called demons. The symmetry lies between angels sent by God, and intermediary spirits of foreign deities, not in good and evil deeds.

In the New Testament, the existence of angels, just like that of demons, is taken for granted. They can intervene and intercede on behalf of humans. Angels protect the righteous (Matthew 4:6, Luke 4:10). They dwell in the heavens (Matthew 28:2, (John 1:51), act as God's warriors (Matthew 26:53) and worship God (Luke 2:13). In the parable of the Rich man and Lazarus, angels behave as psychopomps. The Resurrection of Jesus features angels, telling the woman that Jesus is no longer in the tomb, but has risen from the dead.

According to Augustine of Hippo, "'Angel' is the name of their office, not of their nature. If you seek the name of their nature, it is 'spirit'; if you seek the name of their office, it is 'angel': from what they are, 'spirit', from what they do, 'angel'." Basilian Father Thomas Rosica says, "Angels are very important, because they provide people with an articulation of the conviction that God is intimately involved in human life." Gregory of Nazianzus thought that angels were made as "spirits" and "flames of fire", following Hebrews 1, and that they can be identified with the "thrones, dominions, rulers and authorities" of Colossians 1.

By the late 4th century, the Church Fathers agreed that there were different categories of angels, with appropriate missions and activities assigned to them. There was, however, some disagreement regarding the nature of angels. Some argued that angels had physical bodies, while some maintained that they were entirely spiritual. Some theologians had proposed that angels were not divine but on the level of immaterial beings subordinate to the Trinity. The resolution of this Trinitarian dispute included the development of doctrine about angels.

Belief in angels is fundamental to Islam. The Quranic word for angel (Arabic: ملاك Malāk) derives either from Malaka, meaning "he controlled", due to their power to govern different affairs assigned to them, or from the root either from ʼ-l-k, l-ʼ-k or m-l-k with the broad meaning of a "messenger", just like its counterparts in Hebrew (malʾákh) and Greek (angelos). Unlike their Hebrew counterpart, the term is exclusively used for heavenly spirits of the divine world, but not for human messengers. The Quran refers to both angelic and human messengers as "rasul" instead.

The Quran is the principal source for the Islamic concept of angels. Some of them, such as Gabriel and Michael, are mentioned by name in the Quran, others are only referred to by their function. In hadith literature, angels are often assigned to only one specific phenomena. Angels play a significant role in Mi'raj literature, where Muhammad encounters several angels during his journey through the heavens. Further angels have often been featured in Islamic eschatology, Islamic theology and Islamic philosophy. Duties assigned to angels include, for example, communicating revelations from God, glorifying God, recording every person's actions, and taking a person's soul at the time of death.

In Islam, just like in Judaism and Christianity, angels are often represented in anthropomorphic forms combined with supernatural images, such as wings, being of great size or wearing heavenly articles. The Quran describes them as "messengers with wings—two, or three, or four (pairs): He [God] adds to Creation as He pleases..." Common characteristics for angels are their missing needs for bodily desires, such as eating and drinking. Their lack of affinity to material desires is also expressed by their creation from light: Angels of mercy are created from nur (cold light) in opposition to the angels of punishment created from nar (hot light). Muslims do not generally share the perceptions of angelic pictorial depictions, such as those found in Western art.