Ra-Horakhty as a combined deity of Horus and Ra

Ra or Rē was the ancient Egyptian deity of the sun. By the Fifth Dynasty, in the 25th and 24th centuries BC, he had become one of the most important gods in ancient Egyptian religion, identified primarily with the noon-day sun. Ra ruled in all parts of the created world: the sky, the earth, and the underworld. He was the god of the sun, order, kings and the sky.

Ra was portrayed as a falcon and shared characteristics with the sky-god Horus. At times the two deities were merged as Ra-Horakhty, "Ra, who is Horus of the Two Horizons". In the New Kingdom, when the god Amun rose to prominence he was fused with Ra as Amun-Ra. The cult of the Mnevis bull, an embodiment of Ra, had its center in Heliopolis and there was a formal burial ground for the sacrificed bulls north of the city.

All forms of life were believed to have been created by Ra. In some accounts, humans were created from Ra's tears and sweat, hence the Egyptians call themselves the "Cattle of Ra". In the myth of the Celestial Cow, it is recounted how mankind plotted against Ra and how he sent his eye as the goddess Sekhmet to punish them.

Ra was represented in a variety of forms, often as a falcon adorned with a sun disk between his horns with a Cobra around it, sharing many characteristics with the sky-god Horus.

Other common forms are a man with the head of a beetle (in his form as Khepri), or a man with the head of a ram. Ra was also pictured as a full-bodied ram, beetle, phoenix, heron, serpent, bull, cat, or lion, among others. He was most commonly featured with a ram's head in the Underworld. In this form, Ra is described as being the "ram of the west" or "ram in charge of his harem.

In some literature, Ra is described as an aging king with golden flesh, silver bones, and hair of lapis lazuli.

As a creator god 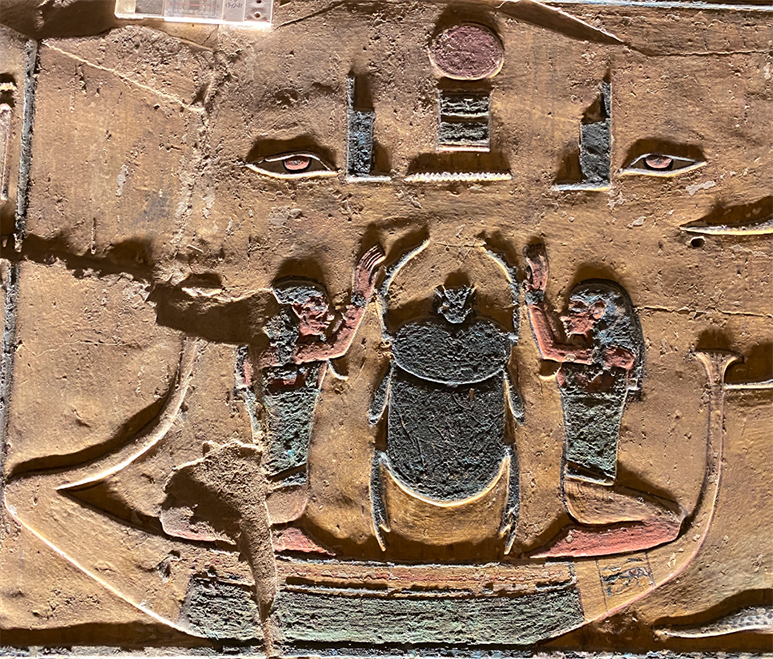 Ra as the beetle Khepri in his barque

The sun is the giver of life, controlling the ripening of crops which were worked by man. Because of the life-giving qualities of the sun the Egyptians worshiped the sun as a god. The creator of the universe and the giver of life, the sun or Ra represented life, warmth and growth. Since the people regarded Ra as a principal god, creator of the universe and the source of life, he had a strong influence on them, which led to him being one of the most worshiped of all the Egyptian gods and even considered King of the Gods.

At an early period in Egyptian history, his influence spread throughout the whole country, bringing multiple representations in form and in name. The most common form combinations are with Atum (his human form), Khepri (the scarab beetle) and Horus (the falcon).

At the beginning of time, when there was nothing but chaos, the sun-god existed alone in the watery mass of Nun which filled the universe. "I am Atum when he was alone in Nun, I am Ra when he dawned, when he began to rule that which he had made." This passage talks about how Atum created everything in human form out of the chaos and how Ra then began to rule over the Earth where humans and divine beings coexisted. He created Shu, god of air, and the goddess of moisture, Tefnut. The siblings symbolized two universal principles of humans: life and right (justice). Ra was believed to have created all forms of life by calling them into existence by uttering their secret names. In some accounts humans were created from Ra's tears and sweat.

Ra was thought to travel on the Atet, two solar barques called the Mandjet (the Boat of Millions of Years) or morning-boat and the Mesektet or evening-boat. These boats took him on his journey through the sky and the Duat, the watery realm inhabited by the Egyptian decans during their 70 days of rest.

While Ra was on the Mesektet, he was in his ram-headed form. Sometimes, members of the Ennead or the decanal gods helped him on his journey, including Set, who overcame the serpent Apophis, and Mehen, who defended against the monsters of the underworld. When Ra was in the underworld, he would visit all of his various forms.

Apophis, the god of chaos (isfet), was an enormous serpent who attempted to stop the sun-boat's journey every night by consuming it or by stopping it in its tracks with a hypnotic stare. During the evening, the Egyptians believed that Ra set as Atum or in the form of a ram. The night boat would carry him through the underworld and back towards the east in preparation for his rebirth. These myths of Ra represented the sun rising as the rebirth of the sun by the sky-goddess Nut; thus attributing the concept of rebirth and renewal to Ra and strengthening his role as a creator god as well.

When Ra was in the underworld, he merged with Osiris. 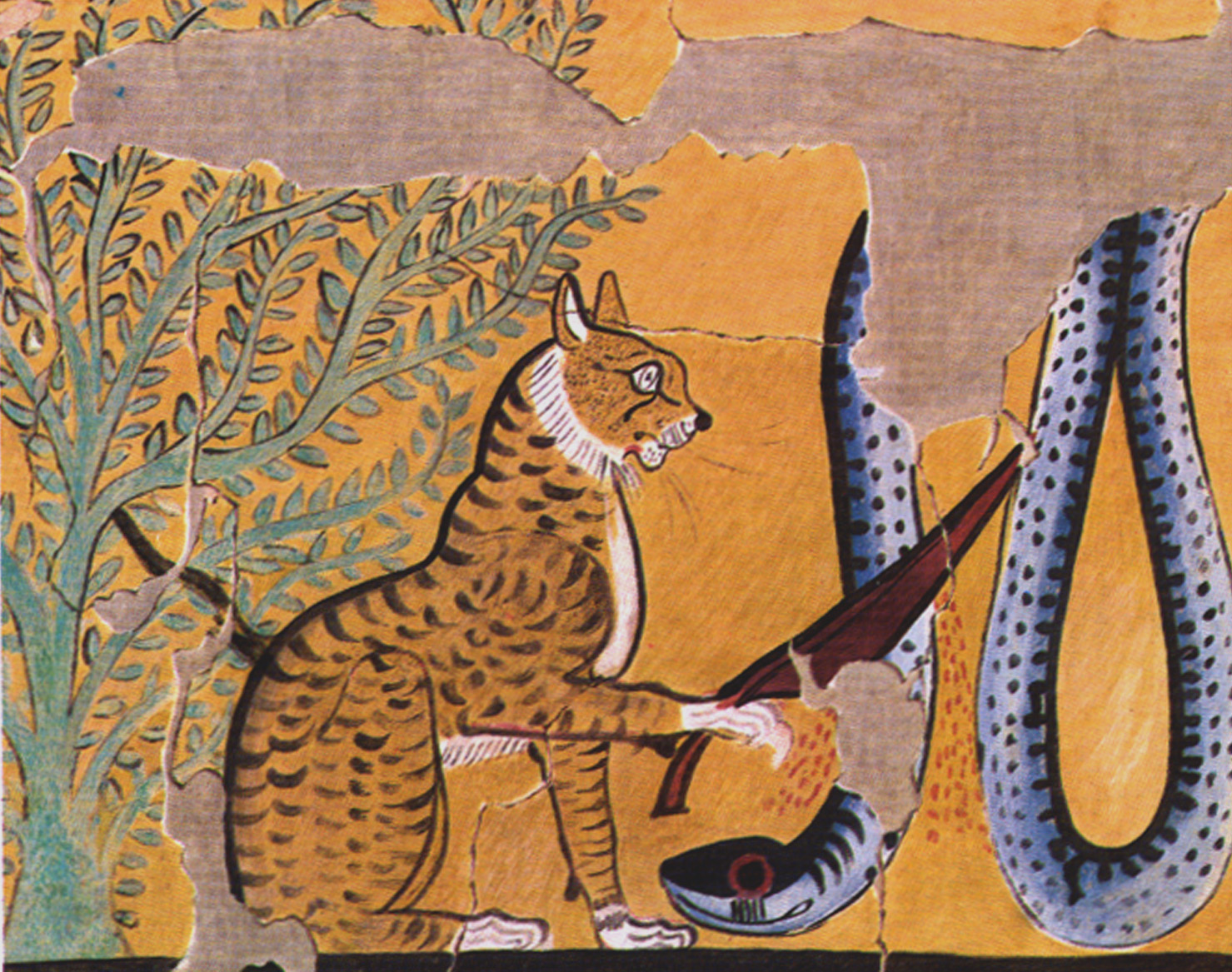 The primary cultic center of Ra was Iunu "the Place of Pillars", later known to the Ptolemaic Kingdom as Heliopolis, located in the suburbs of modern Cairo. He was identified with the local sun god Atum. As Atum or Atum-Ra, he was reckoned the first being and the originator of the Ennead ("The Nine"), consisting of Shu and Tefnut, Geb and Nut, Osiris, Set, Isis and Nephthys. The holiday of "The Receiving of Ra" was celebrated on May 26 in the Gregorian calendar.

Ra's local cult began to grow from roughly the Second Dynasty, establishing him as a sun-deity. By the Fourth Dynasty, pharaohs were seen as Ra's manifestations on Earth, referred to as "Sons of Ra." His worship increased massively in the Fifth Dynasty, when Ra became a state-deity and pharaohs had specially aligned pyramids, obelisks, and sun temples built in his honor. The rulers of the Fifth Dynasty told their followers that they were sons of Ra himself and the wife of the high priest of Heliopolis. These pharaohs spent much of Egypt's money on sun-temples. The first Pyramid Texts gave Ra more and more significance in the journey of the pharaoh through the Duat.

At the time of the New Kingdom of Egypt, the worship of Ra had become more complicated and grander. The walls of tombs were dedicated to extremely detailed texts that depicted Ra's journey through the underworld. Ra was said to carry the prayers and blessings of the living with the souls of the dead on the sun-boat. The idea that Ra aged with the sun became more popular during the rise of the New Kingdom.