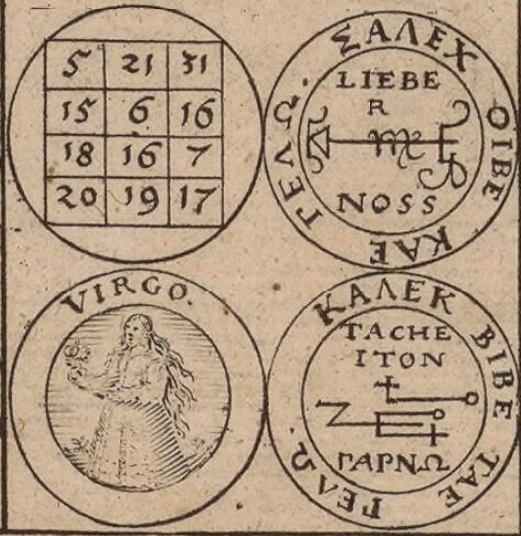 Magical sigils of Virgo from the Magical Calendar

Virgo (♍︎) (Greek: Παρθένος, Parthenos) is the sixth astrological sign in the Zodiac. The sign is mutable and is ruled by the planet Mercury.

The ruling Archangel of the Zodiac over Virgo is Hamaliel.

The symbol of the maiden is based on the Greek goddess Astraea. In Greek mythology, she was the last immortal to abandon Earth at the end of the Silver Age, when the gods fled to Olympus – hence the sign's association with Earth.

Virgo spans the 150–180th degree of the Zodiac. Under the tropical zodiac, the Sun transits this area on average between August 24 and September 22, and transits the constellation Virgo in the sidereal zodiac from approximately September 16 to October 30.

Individuals born under the sign of Viro, depending on which system of astrology they subscribe to, may be called Virgos or Virgoans.

In a general sense, Virgos like to feel useful and attempt to fix things quickly while having lots of ideas for solving problems. They have a reputation for being somewhat judgmental, but they'll have good intentions.