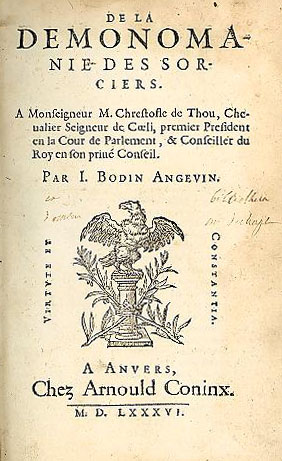 De la démonomanie des sorciers (On the Demon-Mania of Sorcerers) is a French book published in 1580 about witchcraft.

Based on Bodin's own experiences as a judge, this book was written as a guide to other members of the judiciary. While Bodin shows some legal erudition, he does not adhere to the ordinary rules of prosecution and urged the brutal treatment of suspects. The third section of the work lists how to torture, interrogate, condemn and execute witches.

It is one of the earliest texts to give a legal definition of a witch: "A witch is a person, who, though cognizant of the laws of god, endeavors to act through the medium of a pact with the Devil."

The book tells of fifteen distinct crimes of which every witch is guilty, and argues that, in default of proof, violent presumption should suffice for the sentence of witches to death.

This landmark work in the history of witchcraft persecutions was first issued in 1580, with ten editions being published by 1604.

The book, and its definition of a witch was prominently mentioned by Boris Balkan (actor Frank Langella) during a lecture on the Devil in the 1999 film The Ninth Gate.