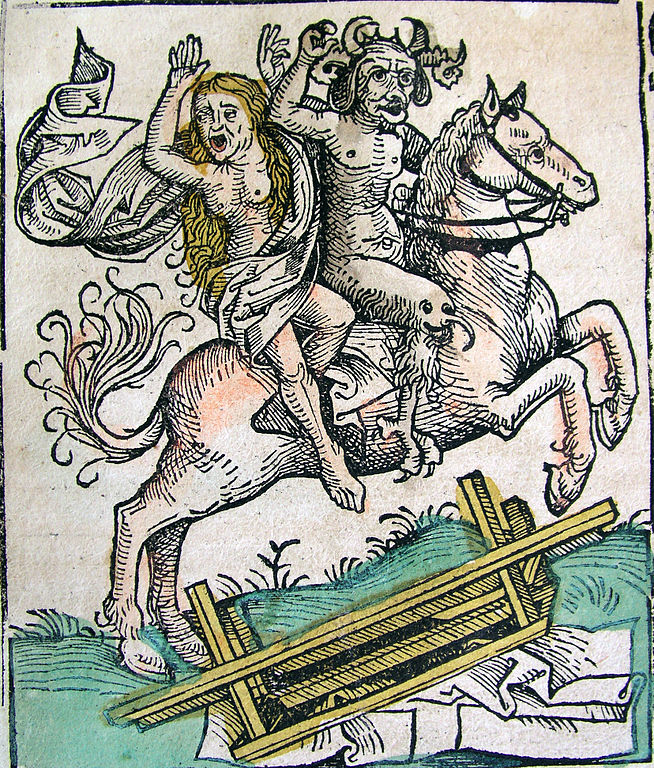 The Devil on Horseback from the Nuremberg Chronicle

This article is about the deity, for the Tarot card, see The Devil (Tarot)

The Devil in Christianity is a deity who became a tempter and a deceiver of mankind after he rebelled against the God of Abraham in an attempt to become equal to God himself. He is depicted as a fallen angel, who was expelled from Heaven at the beginning of time, before God created the material world, and is in constant opposition to God. The devil is identified with several figures in the Bible including the serpent in the Garden of Eden, Lucifer, Satan, the tempter of the Gospels, Leviathan, and the dragon in the Book of Revelation.

Early scholars discussed the role of the devil. Scholars influenced by neoplatonic cosmology, like Origen and Pseudo-Dionysius, portrayed the devil as representing deficiency and emptiness, the entity most remote from the divine. According to Augustine of Hippo the realm of the devil is not nothingness, but an inferior realm standing in opposition to God. The standard Medieval depiction of the devil was set up by Gregory the Great. He integrated the devil, as the first creation of God, into the Christian angelic hierarchy as the highest of the angels (either a cherub or a seraph). But as high as he stood in heaven, so far he fell into the depths of Hell and became the leader of demons.

Since the early reformation period, the devil was imagined as an increasingly powerful entity, with not only a lack of goodness but also a conscious will against God, his word, and his creation. Simultaneously, some reformists interpreted the devil as a mere metaphor for human's inclination to sin and so downgraded the importance of the devil. While the devil played for most scholars no significant role in the Modern Era, he became more important in contemporary Christianity again.

At various times in history, some people such as the Cathars and the Bogomiles, as well as theologians like Marcion and Valentinus, believed that the devil was involved in creating the world. Today these views are not part of mainstream Christianity.

The term belial (בְלִיַּעַל‎, bĕli-yaal) with the broader meaning of worthlessness is used through the Old Testament to denote those who are against God or at least against God's order. In Deuteronomy 13:14 those who tempt people into worshiping something other than Yahweh are related to belial. In 1 Samuel 2:12, the sons of Eli are called belial for not recognizing Yahweh and therefore violating sacrifice rituals. In Psalm 18:4 and Psalm 41:8, belial appears in the context of death and disease. In the Old Testament, both Satan and Belial make it difficult for men to live in harmony with God's will.

However, the role of Belial is in opposition to that of Satan: while Belial, representing chaos and death, stands outside of God's cosmos, Satan roams the earth, fighting for the maintenance of the divine order and punishing precisely everything Belial stands for. However, in the Old Testament, Belial is merely an abstraction and not considered a real independent entity.

The Devil's true form according to Christoph Haizmann

Although in later Christian theology, the devil and his fellow fallen angels are often merged into one category of demonic spirits, the devil is a unique entity throughout the New Testament. The devil is not only a tempter but perhaps rules over the kingdoms of earth. In the temptation of Christ (Matthew 4:8–9 and Luke 4:6–7) the devil offers all kingdoms of the earth to Jesus, implying they belong to him. Since Jesus does not dispute this offer, it may indicate that the authors of those gospels believed this to be true. This interpretation is, however, not shared by all, as Irenaeus argued that, since the devil was a liar since the beginning, he also lied here and that all kingdoms in fact belong to God, referring to Proverbs 21. This event is described in all three synoptic gospels, (Matthew 4:1–11, Mark 1:12–13, and Luke 4:1–13).

Other adversaries of Jesus are ordinary humans although influence by the devil is suggested. John 8:40 speaks about the Pharisees as the "offspring of the devil". John 13:2 states that the devil entered Judas Iscariot before Judas' betrayal. (Luke 22:3) In all three synoptic gospels (Matthew 9:22–29, Mark 3:22–30, and Luke 11:14–20), Jesus' critics accuse him of gaining his power to cast out demons from Beelzebub, the devil. In response, Jesus says that a house divided against itself will fall, so, logically speaking, why would the devil allow one to defeat the devil's works with his own power?

Christian teachings about the Devil

Christian tradition and theology identified the myth about a rising star, thrown into the underworld, told about a Babylonian king in the Bible (Isaiah 14:12) with a fallen angel. The concept of fallen angels is of pre-Christian origin. They appear in writings like the Book of Enoch, Book of Jubilees and arguably in the Pentateuch.

As personification of evil, Christians have understood the devil to be the author of lies and promoter of evil. However, the devil can go no further than God allows, resulting in the problem of evil. Christian scholars had different opinions on the reason behind evil in the world, and often explained evil in relation to the devil.

The devil is often identified with Satan, the accuser in the Book of Job. Only rarely, Satan and the devil are depicted as separate entities.

Liberal Christianity often views the devil metaphorically. This is true of some Conservative Christian groups too, such as the Christadelphians and the Church of the Blessed Hope. Much of the popular lore of the devil is not biblical; instead, it is a post-medieval Christian reading of the scriptures influenced by medieval and pre-medieval Christian popular mythology.