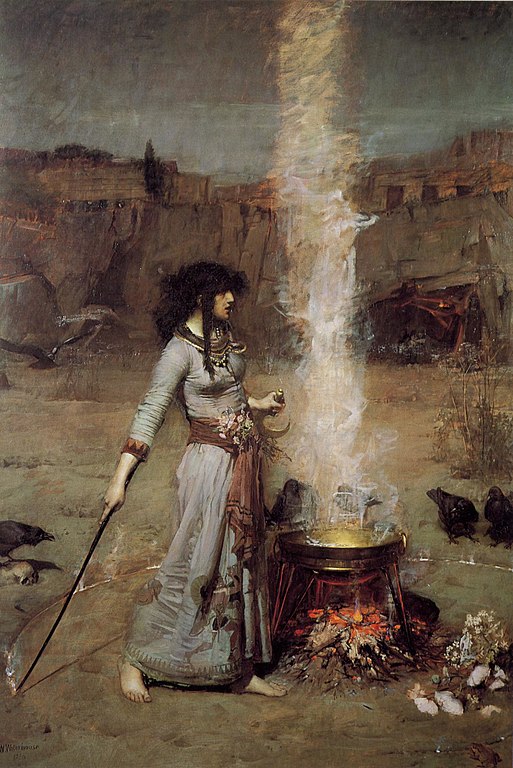 Witchcraft is the use of magic or supernatural powers to harm others. A practitioner is a witch or warlock.

In medieval and early modern Europe, where the term originated, accused witches were usually women who were believed to have attacked their own community, and often to have communed with evil beings. It was thought witchcraft could be thwarted by protective magic or counter-magic, which could be provided by cunning folk or folk healers. Suspected witches were also intimidated, banished, attacked or killed. Often they would be formally prosecuted and punished, if found guilty or simply believed to be guilty.

European witch-hunts in the early modern period led to tens of thousands of executions. Although some folk healers were accused of witchcraft, they made up a minority of those accused. European belief in witchcraft gradually dwindled during and after the Age of Enlightenment.

In time periods and current localities where belief in malicious magic practices exists, practitioners are typically forbidden by law as well as hated and feared by the general populace, while beneficial magic is tolerated or even accepted wholesale by the people — even if the orthodox establishment opposes it.

Probably the best-known characteristic of a witch is her ability to cast a spell – a set of words, a formula or verse, a ritual, or a combination of these, employed to do magic. Spells traditionally were cast by many methods, such as by the inscription of runes or sigils on an object to give that object magical powers; by the immolation or binding of a wax or clay image (poppet) of a person to affect them magically; by the recitation of incantations; by the performance of physical rituals; by the employment of magical herbs as amulets or potions; by gazing at mirrors, swords or other specula (scrying) for purposes of divination; and by many other means.

The ability to work with a familiar, a kind of totem animal or spirit, was often considered evidence of a witch's power.

Historian Ronald Hutton outlined five key characteristics ascribed to witches and witchcraft by most cultures that believe in the concept:

During the 20th century, interest in witchcraft in English-speaking and European countries began to increase, inspired particularly by Margaret Murray's theory of a pan-European witch-cult originally published in 1921, since discredited by further careful historical research. Interest was intensified, however, by Gerald Gardner's claim in 1954 in Witchcraft Today that a form of witchcraft still existed in England. The truth of Gardner's claim is now disputed too.

The first Neopagan groups to publicly appear, during the 1950s and 60s, were Gerald Gardner's Bricket Wood coven and Roy Bowers' Clan of Tubal Cain. They operated as initiatory secret societies. Other individual practitioners and writers such as Paul Huson also claimed inheritance to surviving traditions of witchcraft. The Wicca that Gardner initially taught was a witchcraft religion having much in common with Margaret Murray's hypothetically posited cult of the 1920s.

Various forms of Wicca are now practised as a religion of an initiatory secret society nature with positive ethical principles, organised into autonomous covens and led by a High Priesthood. There is also a large "Eclectic Wiccan" movement of individuals and groups who share key Wiccan beliefs but have no initiatory connection or affiliation with traditional Wicca. Wiccan writings and ritual show borrowings from a number of sources including 19th and 20th-century ceremonial magic, the medieval grimoire known as the Key of Solomon, Aleister Crowley's Ordo Templi Orientis and pre-Christian religions. A survey published in November 2000 cited just over 200,000 people who reported practicing Wicca in the United States.

Wiccan and Neo-Wiccan literature has been described as aiding the empowerment of young women through its lively portrayal of female protagonists. Part of the recent growth in Neopagan religions has been attributed to the strong media presence of fictional pop culture works such as Charmed, Buffy the Vampire Slayer, and the Harry Potter series with their depictions of "positive witchcraft", which differs from the historical, traditional, and Indigenous definitions. Widespread accessibility to related material through internet media such as chat rooms and forums is also thought to be driving this development.

Wiccan beliefs, or pop culture variations thereof, are often considered by adherents to be compatible with liberal ideals such as the Green movement, and particularly with some varieties of feminism, by providing young women with what they see as a means for self-empowerment, control of their own lives, and potentially a way of influencing the world around them. This is the case particularly in North America due to the strong presence of feminist ideals in some branches of the Neopagan communities and the long tradition of women-led and women-only groups such as in Dianic Wicca. The 2002 study Enchanted Feminism: The Reclaiming Witches of San Francisco suggests that some branches of Wicca include influential members of the second wave of feminism, which has also been redefined as a religious movement.