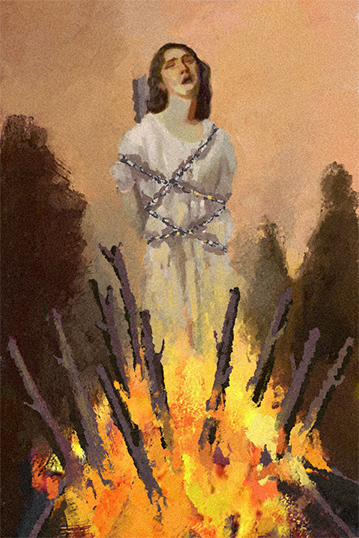 Margaret Aitken being burned alive during the Scottish witchcraft panic

Margaret Aitken was a Scottish woman known as "the great witch of Balwearie." Her false testimony against others contributed to the great Scottish witchcraft panic of 1597. Little is known about her early life, but her participation in witch-hunts caused hundreds of innocent deaths.

Work as a Witch-Finder

Margaret Aitken was accused of witchcraft and arrested on suspicion of that crime in Fife c. April 1597. Under the threat of extreme torture and to spare her own life, during her confession she claimed to be able to recognise other witches by looking for a special mark in their eyes.

In May 1597, she claimed to know of a convention of 2,300 witches in the village of Atholl. As a result, a special commission was formed with the approval of James VI, and prosecutors took her from town to town to detect witches. During 1597 the only other witch finder used in witchcraft cases was Marion Kwyne who featured in the cases brought against two men and thirteen women in Kirkcaldy; academic Stuart Macdonald speculates this may have been Aitken under an assumed name. In addition to Aitken looking into the eyes of those accused of witchcraft, the commission also employed the swimming test – almost the only occasion this test was used in Scotland.

When she reached Glasgow, the minister John Cowper condemned many innocent women to death on her testimony. Any woman suspected of witchcraft was cast into prison and subjected to torture – under which most of them confessed to being guilty. They would then be brought to trial and executed. The exact number of executions carried out by the commission is unknown but is thought to have run into hundreds.

Exposure as a fraud

Around 1 August 1597, Aitken was exposed as a fraud after a sceptical prosecutor took some of those declared guilty and brought them back to Aitken the next day in different clothing. When she declared them innocent, her role as witch-finder was irretrievably undermined and the witch trials stopped.

Following a final confession, where Aitken admitted to falsifying her powers, Marion Walker (an active resistor of John Cowper's witch-hunts) distributed Aitken's confession, which ultimately brought the period to an end - leading to James I rendering the existing commissions at Falkland Palace invalid. Robert Bowes, the English ambassador in Edinburgh, wrote to Lord Burghley in August 1597 that the king was "lately pestered and many ways troubled in the examination of the witches which swarm in exceeding number and (as is credibly reported) in many thousands."

Taken back to Fife, Aitken stood trial and affirmed that all she had said about herself, and about others, was false. Aitken was burnt at the stake in August 1597.