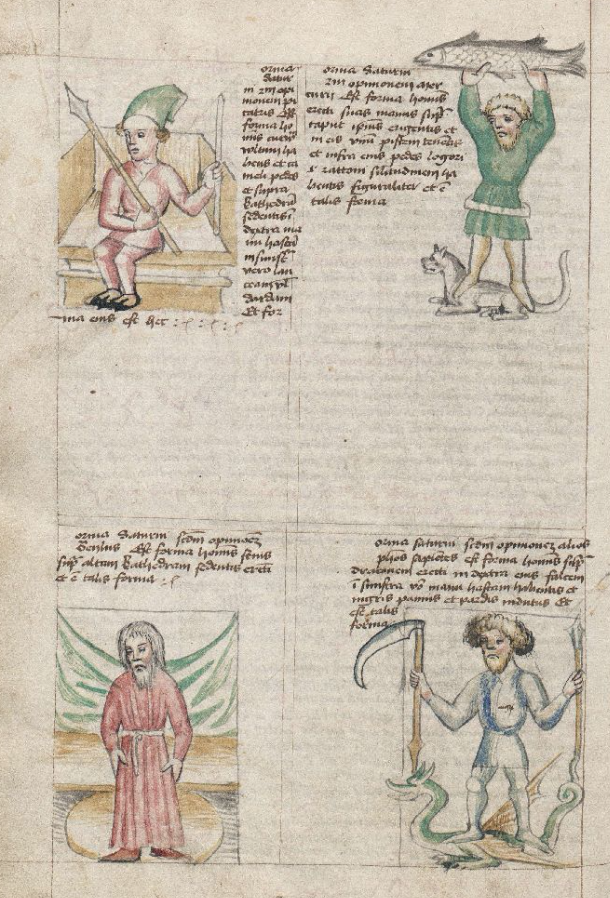 Page depicting Saturn in the Latin edition of the Picatrix

Picatrix is the Latin name used today for a 400-page book of magic and astrology originally written in Arabic under the title Ghāyat al-Ḥakīm (Arabic: غاية الحكيم), which most scholars assume was originally written in the middle of the 11th century, though an argument for composition in the first half of the 10th century has been made. The Arabic work was translated into Spanish and then into Latin during the 13th century, at which time it got the Latin title Picatrix.

The Spanish and Latin versions were the only ones known to Western scholars until Wilhelm Printz discovered an Arabic version in or around 1920.

Picatrix is a composite work that synthesizes older works on magic and astrology. One of the most influential interpretations suggests it is to be regarded as a "handbook of talismanic magic". Another researcher summarizes it as "the most thorough exposition of celestial magic in Arabic", indicating the sources for the work as "Arabic texts on Hermeticism, Sabianism, Ismailism, astrology, alchemy and magic produced in the Near East in the ninth and tenth centuries A.D."

The work is divided into four books, which exhibit a marked absence of systematic exposition. Jean Seznec observed, "Picatrix prescribes propitious times and places and the attitude and gestures of the suppliant; he also indicates what terms must be used in petitioning the stars." As an example, Seznec then reproduces a prayer to Saturn from the work, noting that Fritz Saxl has pointed out that this invocation exhibits "the accent and even the very terms of a Greek astrological prayer to Kronos. This is one indication that the sources of Picatrix are in large part Hellenistic."

While tracing the correlates for the Kabbalistic notion of the astral body, Gershom Scholem cited its occurrence in the Picatrix, and pointed out the background of this concept in Greek papyri and philosophical texts, in Gnostic texts, in Iranian eschatology, and in Islamic and Renaissance Neoplatonism. Scholem also specifically noted Henry Corbin's work in documenting the concept of the perfected nature in Iranian and Islamic religion.

Eugenio Garin declares, "In reality the Latin version of the Picatrix is as indispensable as the Corpus Hermeticum or the writings of Albumasar for understanding a conspicuous part of the production of the Renaissance, including the figurative arts." It has significantly influenced West European esotericism from Marsilio Ficino in the 15th century, to Thomas Campanella in the 17th century. The manuscript in the British Library passed through several hands: Simon Forman, Richard Napier, Elias Ashmole and William Lilly.

The copy of the Picatrix currently in the British Library was once owned by astrologer Simon Forman.