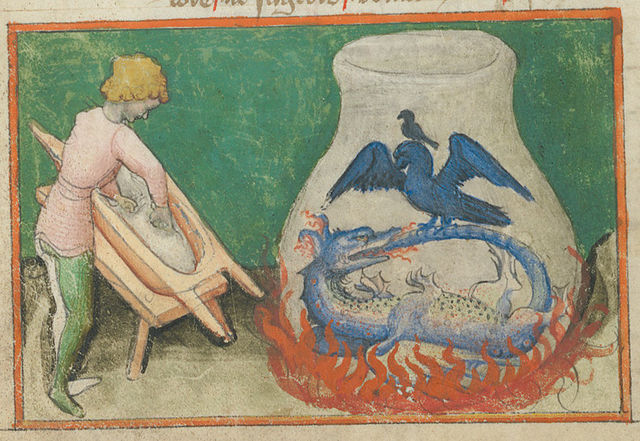 Depiction of Ouroboros from the alchemical treatise Aurora consurgens

Alchemy is an ancient branch of natural philosophy, a philosophical and protoscientific tradition that was historically practiced in China, India, the Muslim world, and Europe. In its Western form, alchemy is first attested in a number of pseudepigraphical texts written in Greco-Roman Egypt during the first few centuries CE.

Alchemists attempted to purify, mature, and perfect certain materials. Common aims were chrysopoeia, the transmutation of "base metals" (e.g., lead) into "noble metals" (particularly gold); the creation of an elixir of immortality; and the creation of panaceas able to cure any disease. The perfection of the human body and soul was thought to result from the alchemical magnum opus ("Great Work").

The concept of creating the philosophers' stone was variously connected with all of these projects.

Alchemy encompasses several philosophical traditions spanning some four millennia and three continents. These traditions' general penchant for cryptic and symbolic language makes it hard to trace their mutual influences and "genetic" relationships. One can distinguish at least three major strands, which appear to be mostly independent, at least in their earlier stages: Chinese alchemy, centered in China and Indian alchemy, centered on the Indian subcontinent; and Western alchemy, which occurred around the Mediterranean and whose center has shifted over the millennia from Greco-Roman Egypt to the Islamic world, and finally medieval Europe.

Chinese alchemy was closely connected to Taoism and Indian alchemy with the Dharmic faiths. In contrast, Western alchemy developed its philosophical system mostly independent of but influenced by various Western religions. It is still an open question whether these three strands share a common origin, or to what extent they influenced each other.

Islamic and European alchemists developed a basic set of laboratory techniques, theories, and terms, some of which are still in use today. They did not abandon the Ancient Greek philosophical idea that everything is composed of four elements, and they tended to guard their work in secrecy, often making use of cyphers and cryptic symbolism. In Europe, the 12th-century translations of medieval Islamic works on science and the rediscovery of Aristotelian philosophy gave birth to a flourishing tradition of Latin alchemy. This late medieval tradition of alchemy would go on to play a significant role in the development of early modern science (particularly chemistry and medicine).

The start of Western alchemy may generally be traced to ancient and Hellenistic Egypt, where the city of Alexandria was a center of alchemical knowledge, and retained its pre-eminence through most of the Greek and Roman periods. Following the work of André-Jean Festugière, modern scholars see alchemical practice in the Roman Empire as originating from the Egyptian goldsmith's art, Greek philosophy and different religious traditions. Tracing the origins of the alchemical art in Egypt is complicated by the pseudepigraphic nature of texts from the Greek alchemical corpus. The treatises of Zosimos of Panopolis, the earliest historically attested author (fl. c. 300 CE), can help in situating the other authors. Zosimus based his work on that of older alchemical authors, such as Mary the Jewess, Pseudo-Democritus, and Agathodaimon, but very little is known about any of these authors. The most complete of their works, The Four Books of Pseudo-Democritus, were probably written in the first century AD.

Recent scholarship tends to emphasize the testimony of Zosimus, who traced the alchemical arts back to Egyptian metallurgical and ceremonial practices. It has also been argued that early alchemical writers borrowed the vocabulary of Greek philosophical schools but did not implement any of its doctrines in a systematic way. Zosimos of Panopolis wrote in the Final Abstinence (also known as the "Final Count"). Zosimos explains that the ancient practice of "tinctures" (the technical Greek name for the alchemical arts) had been taken over by certain "demons" who taught the art only to those who offered them sacrifices. Since Zosimos also called the demons "guardians of places" (οἱ κατὰ τόπον ἔφοροι) and those who offered them sacrifices "priests" (ἱερέα), it is fairly clear that he was referring to the gods of Egypt and their priests. While critical of the kind of alchemy he associated with the Egyptian priests and their followers, Zosimos nonetheless saw the tradition's recent past as rooted in the rites of the Egyptian temples.

Beginning around 1720, a rigid distinction began to be drawn for the first time between "alchemy" and "chemistry". By the 1740s, "alchemy" was now restricted to the realm of gold making, leading to the popular belief that alchemists were charlatans, and the tradition itself nothing more than a fraud. In order to protect the developing science of modern chemistry from the negative censure to which alchemy was being subjected, academic writers during the 18th-century scientific Enlightenment attempted, for the sake of survival, to divorce and separate the "new" chemistry from the "old" practices of alchemy. This move was mostly successful, and the consequences of this continued into the 19th, 20th and 21st centuries.

During the occult revival of the early 19th century, alchemy received new attention as an occult science. The esoteric or occultist school, which arose during the 19th century, held (and continues to hold) the view that the substances and operations mentioned in alchemical literature are to be interpreted in a spiritual sense, and it downplays the role of the alchemy as a practical tradition or protoscience. This interpretation further forwarded the view that alchemy is an art primarily concerned with spiritual enlightenment or illumination, as opposed to the physical manipulation of apparatus and chemicals, and claims that the obscure language of the alchemical texts were an allegorical guise for spiritual, moral or mystical processes.

Modern discussions of alchemy are generally split into an examination of its exoteric practical applications and its esoteric spiritual aspects, despite criticisms by scholars such as Eric J. Holmyard and Marie-Louise von Franz that they should be understood as complementary. The former is pursued by historians of the physical sciences, who examine the subject in terms of early chemistry, medicine, and charlatanism, and the philosophical and religious contexts in which these events occurred. The latter interests historians of esotericism, psychologists, and some philosophers and spiritualists. The subject has also made an ongoing impact on literature and the arts.