The Salem witch trials were a series of hearings and prosecutions of people accused of witchcraft in colonial Massachusetts between February 1692 and May 1693. More than two hundred people were accused. Thirty were found guilty, nineteen of whom were executed by hanging (fourteen women and five men). One other man, Giles Corey, was pressed to death for refusing to plead, and at least five people died in jail.

It was the deadliest witch-hunt in the history of colonial North America. Only fourteen other women and two men had been executed in Massachusetts and Connecticut during the 17th century.

The episode is one of Colonial America's most notorious cases of mass hysteria. It was not unique, but a Colonial American example of the much broader phenomenon of witch trials in the early modern period, which took place also in Europe. Many historians consider the lasting effects of the trials to have been highly influential in subsequent United States history. According to historian George Lincoln Burr, "the Salem witchcraft was the rock on which the theocracy shattered." 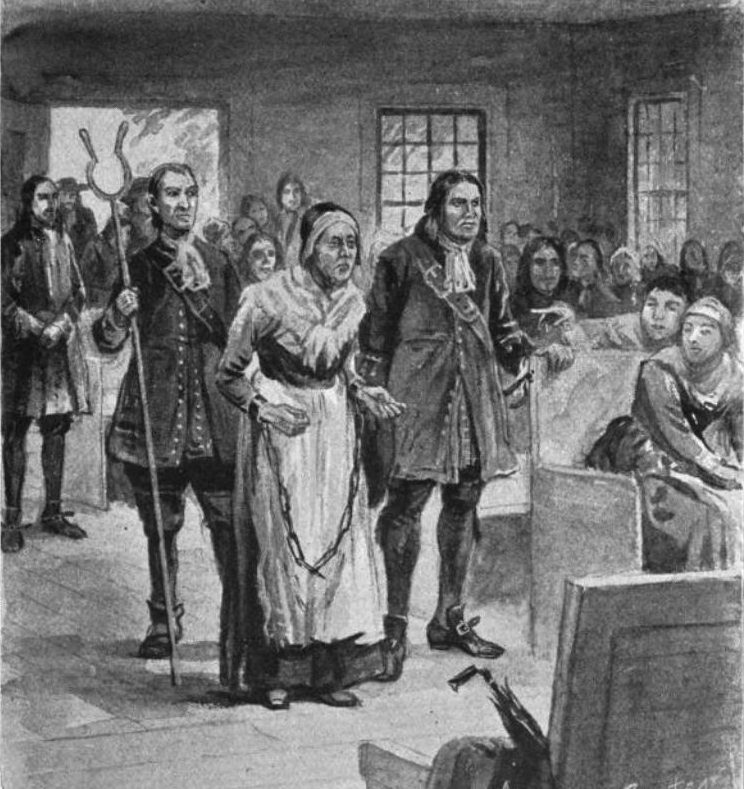 In Salem Village in February 1692, Betty Parris (age 9) and her cousin Abigail Williams (age 11), the daughter and the niece, respectively, of Reverend Samuel Parris, began to have fits described as "beyond the power of epileptic fits or natural disease to effect" by John Hale, the minister of the nearby town of Beverly. The girls screamed, threw things about the room, uttered strange sounds, crawled under furniture, and contorted themselves into peculiar positions, according to the eyewitness account of Reverend Deodat Lawson, a former minister in Salem Village.

The girls complained of being pinched and pricked with pins. A doctor, historically assumed to be William Griggs, could find no physical evidence of any ailment. Other young women in the village began to exhibit similar behaviors. When Lawson preached as a guest in the Salem Village meetinghouse, he was interrupted several times by the outbursts of the afflicted.

The first three people accused and arrested for allegedly afflicting Betty Parris, Abigail Williams, 12-year-old Ann Putnam, Jr., and Elizabeth Hubbard, were Sarah Good, Sarah Osborne, and Tituba—with Tituba being the first. Some historians believe that the accusation by Ann Putnam, Jr. suggests that a family feud may have been a major cause of the witch trials. At the time, a vicious rivalry was underway between the Putnam and Porter families, one which deeply polarized the people of Salem. Citizens would often have heated debates, which escalated into full-fledged fighting, based solely on their opinion of the feud.

Good was a destitute woman accused of witchcraft because of her reputation. At her trial, she was accused of rejecting Puritan ideals of self-control and discipline when she chose to torment and "scorn [children] instead of leading them towards the path of salvation."

Tituba, an enslaved South American Indian woman from the West Indies, likely became a target because of her ethnic differences from most of the other villagers. She was accused of attracting girls like Abigail Williams and Betty Parris with stories of enchantment from Malleus Maleficarum. These tales about sexual encounters with demons, swaying the minds of men, and fortune-telling were said to stimulate the imaginations of girls and made Tituba an obvious target of accusations.

In March, others were accused of witchcraft: Martha Corey, child Dorothy Good, and Rebecca Nurse in Salem Village, and Rachel Clinton in nearby Ipswich. Martha Corey had expressed skepticism about the credibility of the girls' accusations and thus drawn attention. The charges against her and Rebecca Nurse deeply troubled the community because Martha Corey was a full covenanted member of the Church in Salem Village, as was Rebecca Nurse in the Church in Salem Town. If such upstanding people could be witches, the townspeople thought, then anybody could be a witch, and church membership was no protection from accusation.

The initial examinations included physical exams where the accused were examined for unique markings such as moles, birthmarks that were commonly believed to be associated with the Devil's influence. It was thought that those markings represented the Devil drinking the accused women's blood.

The Court of Oyer and Terminer convened in Salem Town on June 2, 1692, with William Stoughton, the new Lieutenant Governor, as Chief Magistrate, Thomas Newton as the Crown's Attorney prosecuting the cases, and Stephen Sewall as clerk. Bridget Bishop's case was the first brought to the grand jury, who endorsed all the indictments against her. Bishop was described as not living a Puritan lifestyle, for she wore black clothing and odd costumes, which was against the Puritan code. When she was examined before her trial, Bishop was asked about her coat, which had been awkwardly "cut or torn in two ways."

This, along with her "immoral" lifestyle, affirmed to the jury that Bishop was a witch. She went to trial the same day and was convicted. On June 3, the grand jury endorsed indictments against Rebecca Nurse and John Willard, but they did not go to trial immediately, for reasons which are unclear. Bishop was executed by hanging on June 10, 1692.

In September, grand juries indicted 18 more people. The grand jury failed to indict William Proctor, who was re-arrested on new charges. On September 19, 1692, Giles Corey refused to plead at arraignment, and was killed by peine forte et dure, a form of torture in which the subject is pressed beneath an increasingly heavy load of stones, in an attempt to make him enter a plea. Four pleaded guilty and 11 others were tried and found guilty.

End of the trials

In January 1693, the new Superior Court of Judicature, Court of Assize and General Gaol [Jail] Delivery convened in Salem, Essex County, again headed by William Stoughton, as Chief Justice, with Anthony Checkley continuing as the Attorney General, and Jonathan Elatson as Clerk of the Court. The first five cases tried in January 1693 were of the five people who had been indicted but not tried in September: Sarah Buckley, Margaret Jacobs, Rebecca Jacobs, Mary Whittredge (or Witheridge) and Job Tookey. All were found not guilty. Grand juries were held for many of those remaining in jail. Charges were dismissed against many, but 16 more people were indicted and tried, three of whom were found guilty: Elizabeth Johnson Jr., Sarah Wardwell, and Mary Post.

When Stoughton wrote the warrants for the execution of these three and others remaining from the previous court, Governor Phips issued pardons, sparing their lives. In late January/early February, the Court sat again in Charlestown, Middlesex County, and held grand juries and tried five people: Sarah Cole (of Lynn), Lydia Dustin and Sarah Dustin, Mary Taylor and Mary Toothaker. All were found not guilty but were not released until they paid their jail fees. Lydia Dustin died in jail on March 10, 1693.

At the end of April, the Court convened in Boston, Suffolk County, and cleared Capt. John Alden by proclamation. It heard charges against a servant girl, Mary Watkins, for falsely accusing her mistress of witchcraft. In May, the Court convened in Ipswich, Essex County, and held a variety of grand juries. They dismissed charges against all but five people. Susannah Post, Eunice Frye, Mary Bridges Jr., Mary Barker and William Barker Jr. were all found not guilty at trial, finally putting an end to the series of trials and executions.