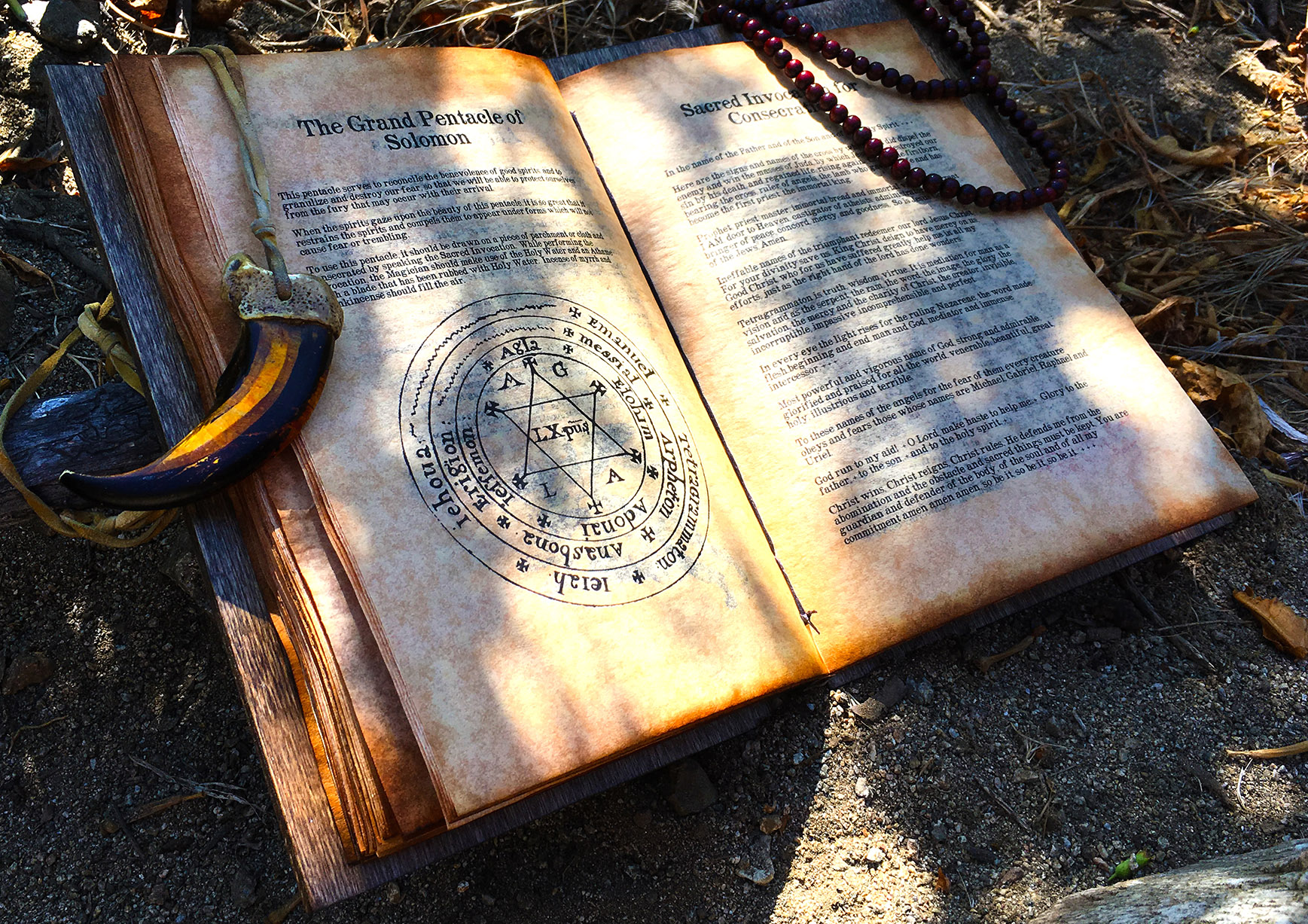 The Grimoire of Heaven and Hell, an example of a grimoire from the modern period

A grimoire (/ɡrɪmˈwɑːr/ grim-WAHR) (also known as a "book of spells" or a "spellbook") is a textbook of magic, typically including instructions on how to create magical objects like talismans and amulets, how to perform magical spells, charms and divination, and how to summon or invoke supernatural entities such as angels, spirits, deities, and demons.

In many cases, the books themselves are believed to be imbued with magical powers, although in many cultures, other sacred texts that are not grimoires (such as the Bible) have been believed to have supernatural properties intrinsically. The primary contents found in a grimoire would be information on spells, rituals, the preparation of magical tools, and lists of ingredients and their magical correspondences. In this manner, while all books on magic could be thought of as grimoires, not all magical books should be thought of as grimoires.

The earliest known written magical incantations come from ancient Mesopotamia (modern Iraq), where they have been found inscribed on cuneiform clay tablets that archaeologists excavated from the city of Uruk and dated to between the 5th and 4th centuries BC. The ancient Egyptians also employed magical incantations, which have been found inscribed on amulets and other items. The Egyptian magical system, known as heka, was greatly altered and expanded after the Macedonians, led by Alexander the Great, invaded Egypt in 332 BC.

Under the next three centuries of Hellenistic Egypt, the Coptic writing system evolved, and the Library of Alexandria was opened. This likely had an influence upon books of magic, with the trend on known incantations switching from simple health and protection charms to more specific things, such as financial success and sexual fulfillment. Around this time the legendary figure of Hermes Trismegistus developed as a conflation of the Egyptian god Thoth and the Greek Hermes; this figure was associated with writing and magic and, therefore, of books on magic.

The ancient Greeks and Romans believed that books on magic were invented by the Persians. The 1st-century AD writer Pliny the Elder stated that magic had been first discovered by the ancient philosopher Zoroaster around the year 647 BC but that it was only written down in the 5th century BC by the magician Osthanes. His claims are not, however, supported by modern historians.

The ancient Jewish people were often viewed as being knowledgeable in magic, which, according to legend, they had learned from Moses, who had learned it in Egypt. Among many ancient writers, Moses was seen as an Egyptian rather than a Jew. Two manuscripts likely dating to the 4th century, both of which purport to be the legendary eighth Book of Moses (the first five being the initial books in the Biblical Old Testament), present him as a polytheist who explained how to conjure gods and subdue demons.

Meanwhile, there is definite evidence of grimoires being used by certain, particularly Gnostic, sects of early Christianity. In the Book of Enoch found within the Dead Sea Scrolls, for instance, there is information on astrology and the angels. In possible connection with the Book of Enoch, the idea of Enoch and his great-grandson Noah having some involvement with books of magic given to them by angels continued through to the medieval period.

Israelite King Solomon was a Biblical figure associated with magic and sorcery in the ancient world. The 1st-century Romano-Jewish historian Josephus mentioned a book circulating under the name of Solomon that contained incantations for summoning demons and described how a Jew called Eleazar used it to cure cases of possession. The book may have been the Testament of Solomon but was more probably a different work. The pseudepigraphic Testament of Solomon is one of the oldest magical texts. It is a Greek manuscript attributed to Solomon and likely written in either Babylonia or Egypt sometime in the first five centuries AD, over 1,000 years after Solomon's death. 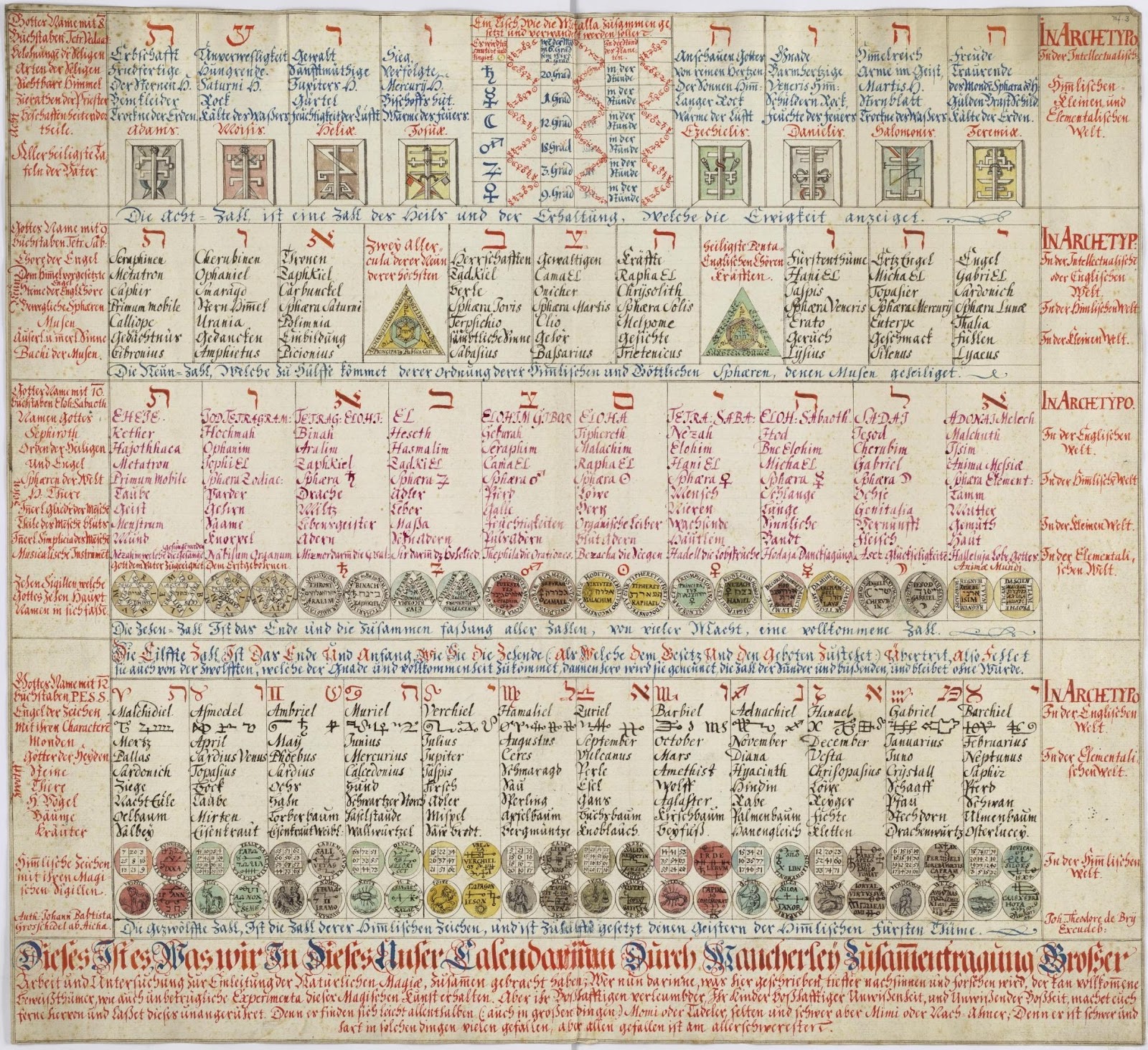 Page from the Magical Calendar, a typical grimoire from the Medieval period

In the Medieval period, the production of grimoires continued in Christendom, as well as amongst Jews and the followers of the newly founded Islamic faith. As the historian Owen Davies noted, "while the Christian Church was ultimately successful in defeating pagan worship it never managed to demarcate clearly and maintain a line of practice between religious devotion and magic." The use of such books on magic continued. In Christianised Europe, the Church divided books of magic into two kinds: those that dealt with "natural magic" and those that dealt in "demonic magic".

The former was acceptable because it was viewed as merely taking note of the powers in nature that were created by God; for instance, the Anglo-Saxon leechbooks, which contained simple spells for medicinal purposes, were tolerated. Demonic magic was not acceptable, because it was believed that such magic did not come from God, but from the Devil and his demons. These grimoires dealt in such topics as necromancy, divination and demonology. Despite this, "there is ample evidence that the mediaeval clergy were the main practitioners of magic and therefore the owners, transcribers, and circulators of grimoires," while several grimoires were attributed to Popes.

One such Arabic grimoire devoted to astral magic, the 12th-century Ghâyat al-Hakîm fi'l-sihr, was later translated into Latin and circulated in Europe during the 13th century under the name of the Picatrix. However, not all such grimoires of this era were based upon Arabic sources. The 13th-century Sworn Book of Honorius, for instance, was (like the ancient Testament of Solomon before it) largely based on the supposed teachings of the Biblical King Solomon and included ideas such as prayers and a ritual circle, with the mystical purpose of having visions of God, Hell, and Purgatory and gaining much wisdom and knowledge as a result. Another was the Hebrew Sefer Raziel HaMalakh, translated in Europe as the Liber Razielis Archangeli.

A later book also claiming to have been written by Solomon was originally written in Greek during the 15th century, where it was known as the Magical Treatise of Solomon or the Little Key of the Whole Art of Hygromancy, Found by Several Craftsmen and by the Holy Prophet Solomon. In the 16th century, this work had been translated into Latin and Italian, being renamed the Clavicula Salomonis, or the Key of Solomon.

As the early modern period commenced in the late 15th century, many changes began to shock Europe that would have an effect on the production of grimoires. Historian Owen Davies classed the most important of these as the Protestant Reformation and subsequent Catholic Counter-Reformation, the witch-hunts and the advent of printing. The Renaissance saw the continuation of interest in magic that had been found in the Mediaeval period, and in this period, there was an increased interest in Hermeticism among occultists and ceremonial magicians in Europe, largely fueled by the 1471 translation of the ancient Corpus Hermeticum into Latin by Marsilio Ficino (1433–99).

Alongside this, there was a rise in interest in the Jewish mysticism known as the Kabbalah, which was spread across the continent by Pico della Mirandola and Johannes Reuchlin. The most important magician of the Renaissance was Heinrich Cornelius Agrippa (1486–1535), who widely studied occult topics and earlier grimoires and eventually published his own, the Three Books of Occult Philosophy, in 1533. A similar figure was the Swiss magician known as Paracelsus (1493–1541), who published Of the Supreme Mysteries of Nature, in which he emphasised the distinction between good and bad magic. A third such individual was Johann Georg Faust, upon whom several pieces of later literature were written, such as Christopher Marlowe's Doctor Faustus, that portrayed him as consulting with demons.

The idea of demonology had remained strong in the Renaissance, and several demonological grimoires were published, including The Fourth Book of Occult Philosophy, which falsely claimed to having been authored by Agrippa, and the Pseudomonarchia Daemonum, which listed 69 demons.

Most true grimoires of this period were hand-written manuscripts that were never properly published. The author is often unknown, and the books were merely sheafs of paper bound together with goatskin binding. An excellent example of this is the 1507 Book of Magical Charms. 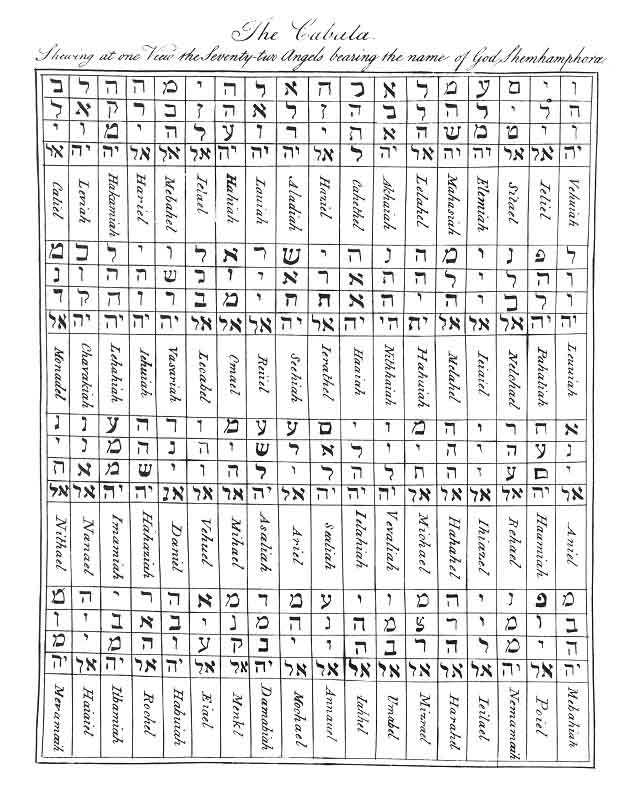 Chart of Kabbalistic angels from The Magus

The 18th century saw the rise of the Enlightenment, a movement devoted to science and rationalism, predominantly amongst the ruling classes. However, amongst much of Europe, belief in magic and witchcraft persisted, as did the witch trials in certain areas. Governments tried to crack down on magicians and fortune tellers, particularly in France, where the police viewed them as social pests who took money from the gullible, often in a search for treasure. In doing so, they confiscated many grimoires.

In Britain, new grimoires continued to be produced throughout the 18th century, such as Ebenezer Sibly's A New and Complete Illustration of the Celestial Science of Astrology. In the last decades of that century, London experienced a revival of interest in the occult that was further propagated when Francis Barrett published The Magus in 1801. The Magus contained many things taken from older grimoires, particularly those of Cornelius Agrippa, and while not achieving initial popularity upon release, gradually became an influential text.

Since the 1900s, many occult and esoteric authors have created books of magic that fit the definition of grimoires. Although many of these books claim to contain ancient knowledge, all were compiled and published after 1900. Some authors of modern grimoires include: