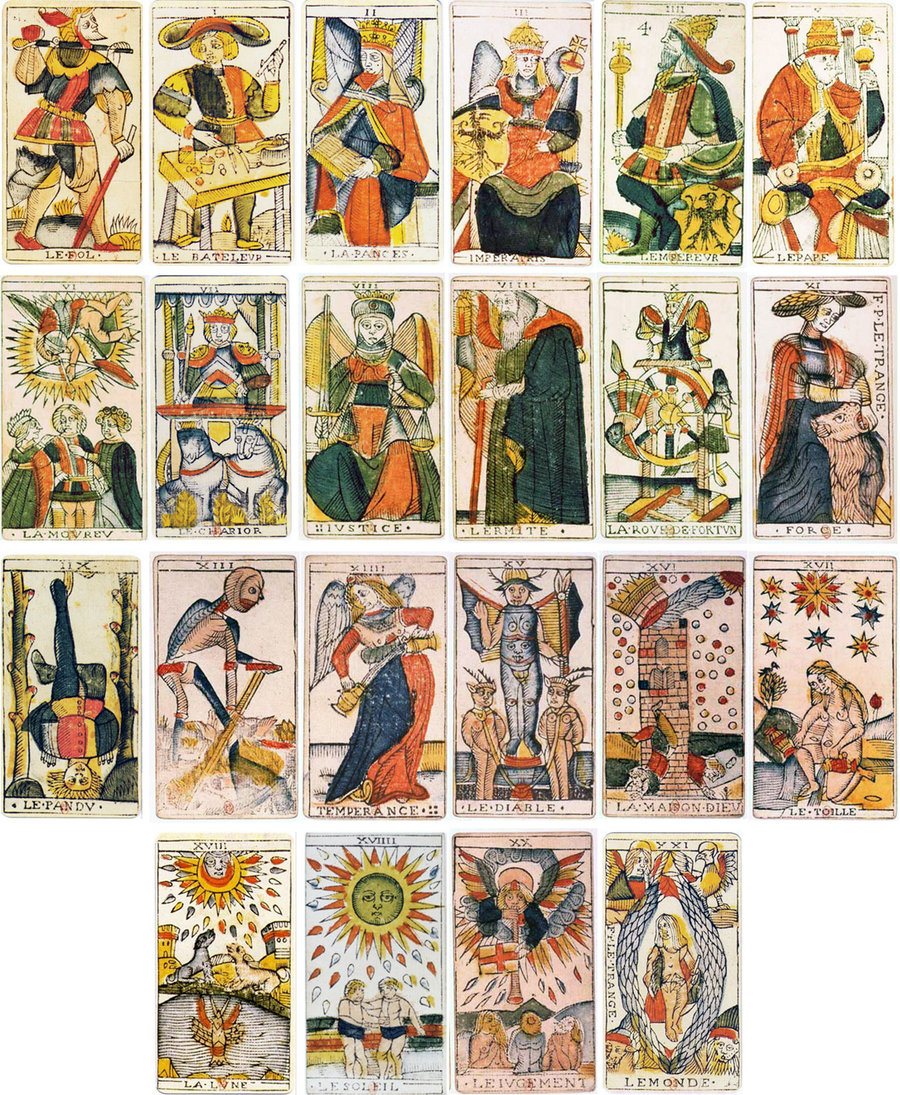 The Tarot (/ˈtæroʊ/, first known as trionfi and later as tarocchi or tarock) is a pack of playing cards, used from at least the mid-15th century in various parts of Europe to play games such as Italian tarocchini, French Tarot and Austrian Königrufen, many of which are still played today. In the late 18th century, some Tarot decks began to be used for divination, leading to custom decks developed for such occult purposes.

Like the common playing cards, Tarot has four suits which vary by region: French suits in Northern Europe, Latin suits in Southern Europe, and German suits in Central Europe. Each suit has 14 cards: ten pip cards numbering from one (or Ace) to ten, and four face cards (King, Queen, Knight, and Jack/Knave/Page). In addition, the tarot has a separate 21-card trump suit and a single card known as The Fool; this 22-card section of the tarot deck is known in divinatory circles as the Major Arcana. Depending on the game, The Fool may act as the top trump or may be played to avoid following suit. These tarot cards are still used throughout much of Europe to play conventional card games without occult associations.

Among English-speaking countries where these games are not played frequently, tarot cards are used primarily for novelty and divinatory purposes, usually using specially designed packs. Some who use tarot for cartomancy believe that the cards have esoteric links to ancient Egypt, the Kabbalah, Indian Tantra, or the I Ching, though scholarly research has demonstrated that tarot cards were invented in northern Italy in the 15th century and confirmed that there is no historical evidence of the usage of tarot for divination before the late 18th century. 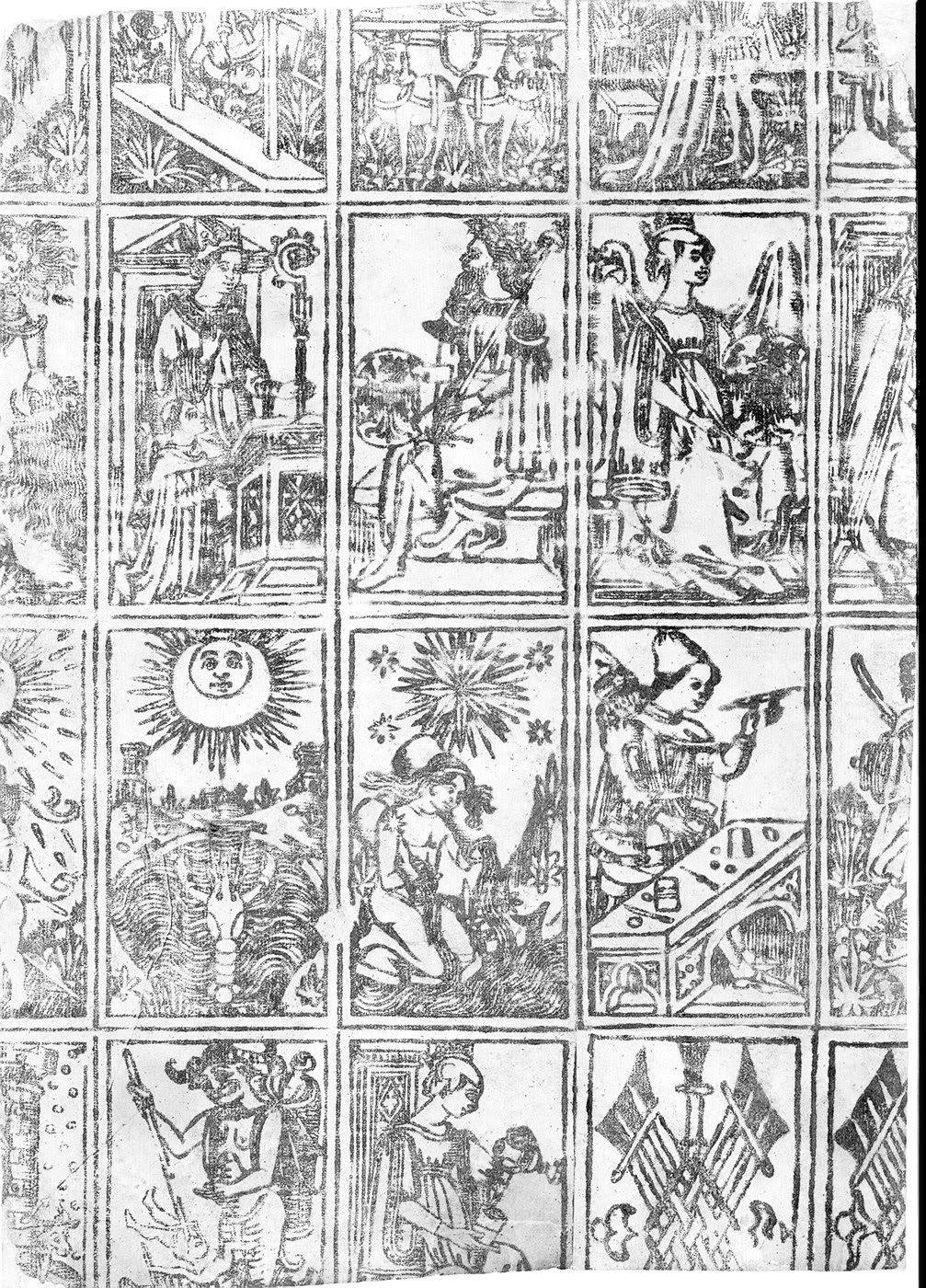 Playing cards first entered Europe in the late 14th century, but the origin is unknown. The first records date to 1367 in Berne and they appear to have spread very rapidly across the whole of Europe, as may be seen from the records, mainly of card games being banned. Little is known about the appearance and number of these cards; the only significant information being provided by a text by John of Rheinfelden in 1377 from Freiburg im Breisgau, who, in addition to other versions describes the basic pack as containing the still-current 4 suits of 13 cards, the courts usually being the King, Ober and Unter ("marshals"), although Dames and Queens were already known by then.

One early pattern of playing cards that evolved was one with the suits of Batons or Clubs, Coins, Swords, and Cups. These suits are still used in traditional Italian, Spanish and Portuguese playing card decks, but have also been adapted in packs used specifically for tarot divination cards that first appeared in the late 18th century.

The first documented tarot packs were recorded between 1440 and 1450 in Milan, Ferrara, Florence and Bologna when additional trump cards with allegorical illustrations were added to the common four-suit pack. These new decks were called carte da trionfi, triumph cards, and the additional cards known simply as trionfi, which became "trumps" in English. The earliest documentation of trionfi is found in a written statement in the court records of Florence, in 1440, regarding the transfer of two decks to Sigismondo Pandolfo Malatesta.

The oldest surviving tarot cards are the 15 or so Visconti-Sforza Tarot decks painted in the mid-15th century for the rulers of the Duchy of Milan. A lost tarot-like pack was commissioned by Duke Filippo Maria Visconti and described by Martiano da Tortona probably between 1418 and 1425, since the painter he mentions, Michelino da Besozzo, returned to Milan in 1418, while Martiano himself died in 1425. He described a 60-card deck with 16 cards having images of the Roman gods and suits depicting four kinds of birds. The 16 cards were regarded as "trumps" since in 1449 Jacopo Antonio Marcello recalled that the now deceased duke had invented a novum quoddam et exquisitum triumphorum genus, or "a new and exquisite kind of triumphs". Other early decks that also showcased classical motifs include the Sola-Busca and Boiardo-Viti decks of the 1490s.

In Florence, an expanded deck called Minchiate was used. This deck of 97 cards includes astrological symbols and the four elements, as well as traditional tarot motifs.

Although a Dominican preacher inveighed against the evil inherent in cards (chiefly owing to their use in gambling) in a sermon in the 15th century, no routine condemnations of tarot were found during its early history.

Because the earliest tarot cards were hand-painted, the number of the decks produced is thought to have been small. It was only after the invention of the printing press that mass production of cards became possible. The expansion of tarot outside of Italy, first to France and Switzerland, occurred during the Italian Wars. The most important tarot pattern used in these two countries was the Tarot of Marseilles of Milanese origin.

The word Tarot and German Tarock derive from the Italian Tarocchi, the origin of which is uncertain but taroch was used as a synonym for foolishness in the late 15th and early 16th centuries. The decks were known exclusively as Trionfi during the fifteenth century. The new name first appeared in Brescia around 1502 as Tarocho. During the 16th century, a new game played with a standard deck but sharing a very similar name (Trionfa) was quickly becoming popular. This coincided with the older game being renamed tarocchi.

In modern Italian, the singular term is Tarocco, which, as a noun, refers to a cultivar of blood orange. The attribute Tarocco and the verb Taroccare are used regionally to indicate that something is fake or forged. This meaning is directly derived from the tarocchi game as played in Italy, in which tarocco indicates a card that can be played in place of another card.

The original purpose of tarot cards was to play games. A very cursory explanation of rules for a tarot-like deck is given in a manuscript by Martiano da Tortona before 1425. Vague descriptions of game play or game terminology follow for the next two centuries until the earliest known complete description of rules for a French variant in 1637. The game of tarot has many regional variations. Tarocchini has survived in Bologna and there are still others played in Piedmont and Sicily, but in Italy the game is generally less popular than elsewhere.

The 18th century saw tarot's greatest revival, during which it became one of the most popular card games in Europe, played everywhere except Ireland and Britain, the Iberian peninsula, and the Ottoman Balkans. French tarot experienced another revival beginning in the 1970s and France has the strongest tarot gaming community. Regional tarot games—often known as tarock, tarok, or tarokk are widely played in central Europe within the borders of the former Austro-Hungarian empire. 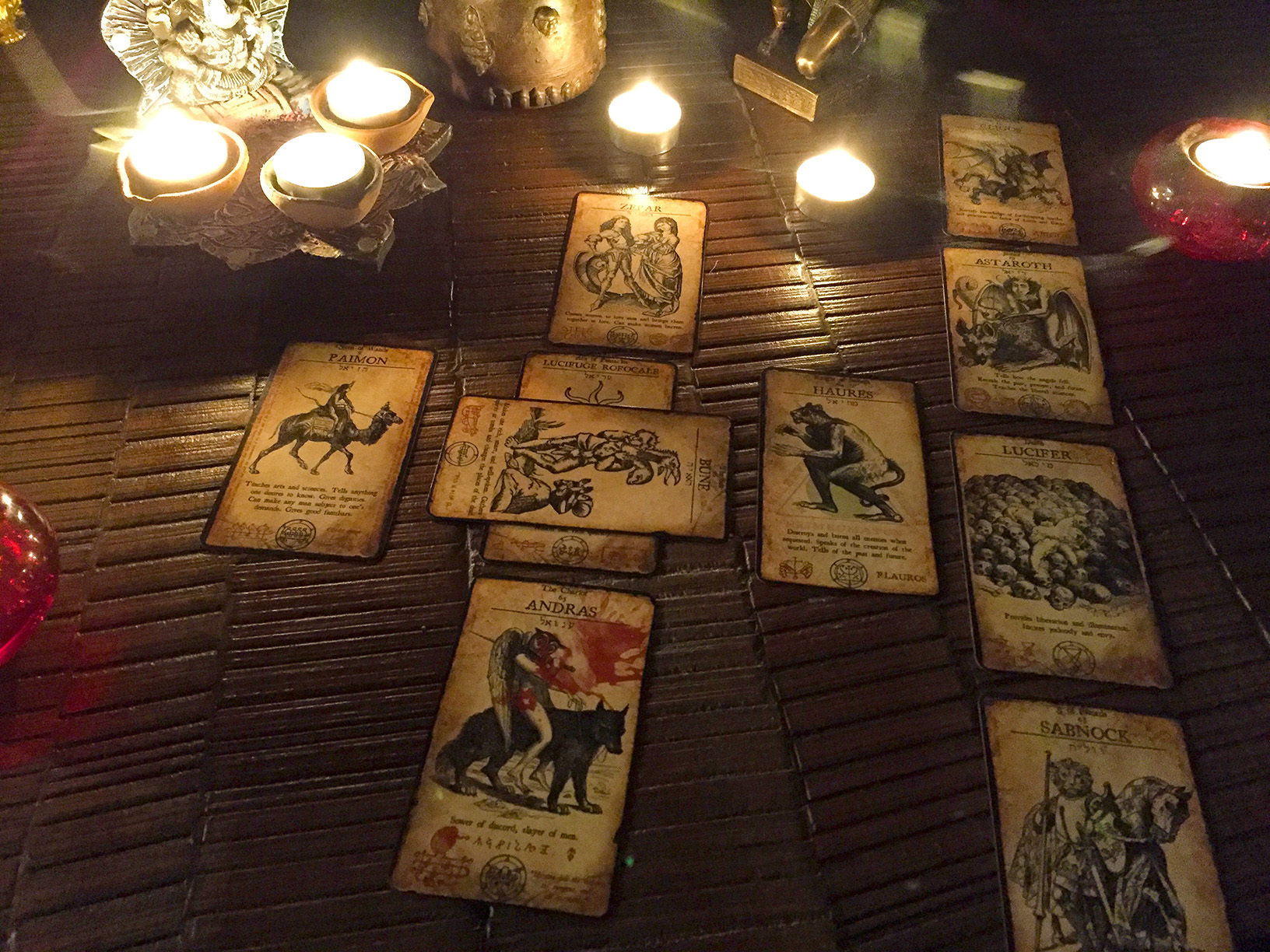 The earliest evidence of a tarot deck used for cartomancy comes from an anonymous manuscript from around 1750 which documents rudimentary divinatory meanings for the cards of the Tarocco Bolognese. The popularization of esoteric tarot started with Antoine Court de Gébelin and Jean-Baptiste Alliette (also known as "Etteilla") in Paris during the 1780s, using the Tarot of Marseilles. French tarot players abandoned the Marseilles tarot in favor of the Tarot Nouveau around 1900, with the result that the Marseilles pattern is now used mostly by cartomancers.

Etteilla was the first to issue a tarot deck specifically designed for occult purposes around 1789. In keeping with the unsubstantiated belief that such cards were derived from the Book of Thoth, Etteilla's tarot contained themes related to ancient Egypt.

The Major Arcana (greater secrets), or trump cards, consists of 22 cards without suits, and the Minor Arcana (lesser secrets) consists of 56 cards, divided into four suits of 14 cards each. The terms "Major Arcana" and "Minor Arcana" were first used by Jean-Baptiste Pitois (also known as Paul Christian) and are never used in relation to tarot card games. Some decks exist primarily as artwork, and such art decks sometimes contain only the 22 Major Arcana.

The three most common decks used for divination are the Tarot of Marseilles, the Rider-Waite Tarot deck, and the Thoth Tarot deck.

Aleister Crowley, who devised the Thoth Tarot deck along with Lady Frieda Harris, stated of the tarot: "The origin of this pack of cards is very obscure. Some authorities seek to put it back as far as the ancient Egyptian Mysteries; others try to bring it forward as late as the fifteenth or even the sixteenth century ... [but] The only theory of ultimate interest about the Tarot is that it is an admirable symbolic picture of the Universe, based on the data of the Holy Qabalah."