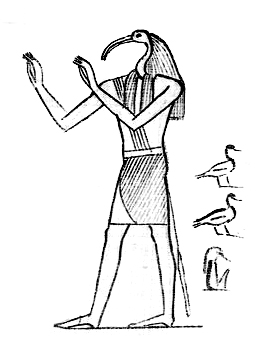 Thoth as depicted on the Greenfield Papyrus

Thoth is an ancient Egyptian deity. In art, he was often depicted as a man with the head of an ibis or a baboon, animals sacred to him. His feminine counterpart was Seshat, and his wife was Ma'at. He was the god of the moon, wisdom, writing, hieroglyphs, science, magic, art, and judgment. His Greek equivalent is Hermes.

Thoth's chief temple was located in the city of Hermopolis. Later known as el-Ashmunein in Egyptian Arabic, the Temple of Thoth was mostly destroyed before the beginning of the Christian era, but its very large pronaos was still standing in 1826.

Thoth played many vital and prominent roles in Egyptian religion, such as maintaining the universe, and being one of the two deities (the other being Ma'at) who stood on either side of Ra's solar barque. In the later history of ancient Egypt, Thoth became heavily associated with the arbitration of godly disputes, the art of ritual magic, the system of writing, and the judgment of the dead.

According to Theodor Hopfner, Thoth's Egyptian name written as ḏḥwty originated from ḏḥw, claimed to be the oldest known name for the ibis, normally written as hbj. The addition of -ty denotes that he possessed the attributes of the ibis. Hence Thoth's name would mean "He who is like the ibis," according to this interpretation.

The name was transliterated into Sahidic Coptic variously as Thoout or Thōth. These spellings reflect known sound changes from earlier Egyptian such as the loss of ḏ palatalization and merger of ḥ with h. Following Egyptological convention, which eschews vowel reconstruction, the consonant skeleton ḏḥwty would be rendered "Djehuti" and the god is sometimes found under this name. However, the Greek form "Thoth" is more common.

One of Thoth's titles, "Thrice great", was translated to the Greek trismégistos, making Hermes Trismegistus. 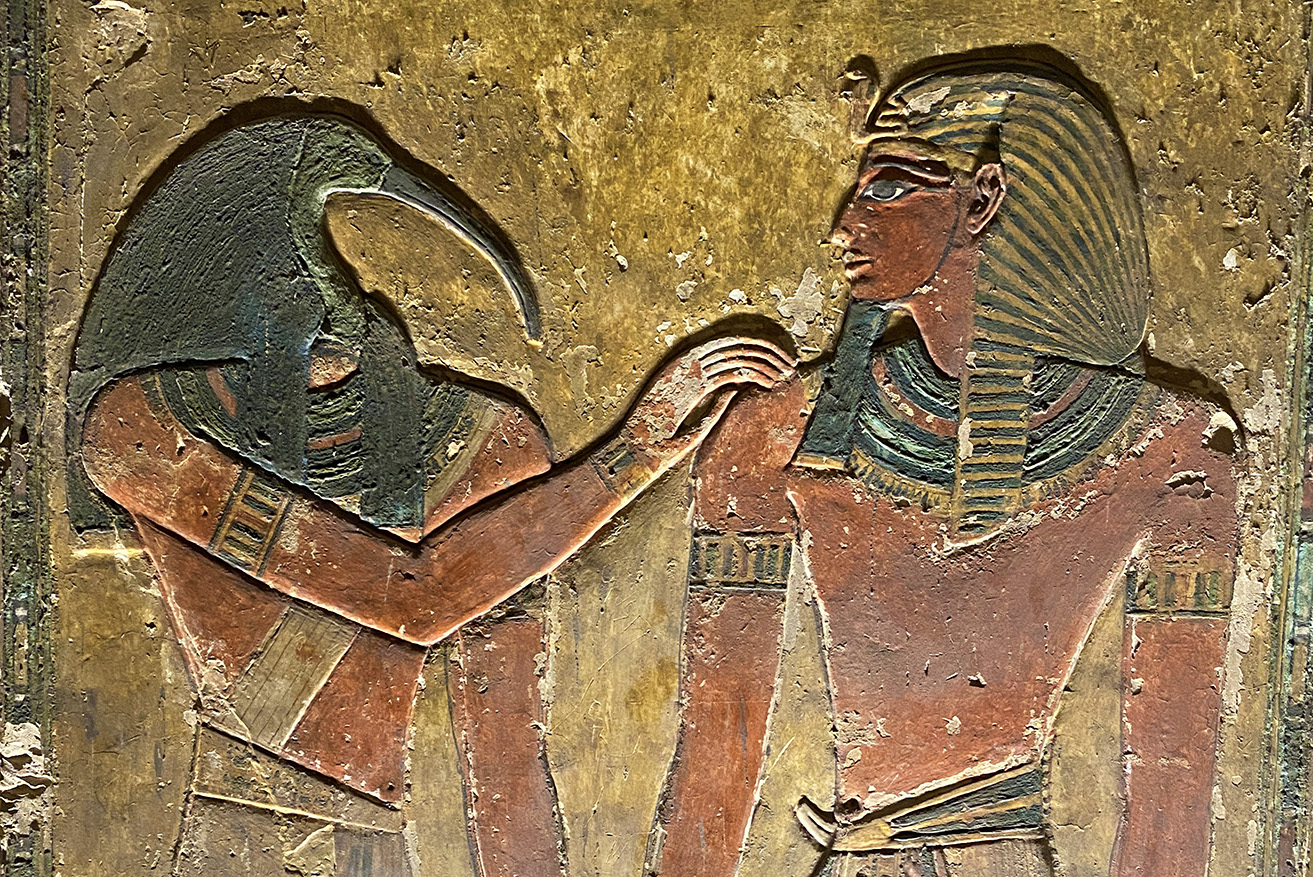 Thoth with Seti I

Thoth has been depicted in many ways depending on the era and on the aspect the artist wished to convey. Usually, he is depicted in his human form with the head of an ibis. In this form, he can be represented as the reckoner of times and seasons by a headdress of the lunar disk sitting on top of a crescent moon resting on his head. When depicted as a form of Shu or Ankher, he was depicted to be wearing the respective god's headdress. Sometimes he was also seen in art to be wearing the Atef crown or the double crown of Upper and Lower Egypt. When not depicted in this common form, he sometimes takes the form of the ibis directly.

He also appears as a dog-faced baboon or a man with the head of a baboon when he is A'an, the god of equilibrium. In the form of A'ah-Djehuty he took a more human-looking form. These forms are all symbolic and are metaphors for Thoth's attributes. Thoth is often depicted holding an ankh, the Egyptian symbol for life.

Thoth served as scribe of Ra and is credited with the invention of writing and Egyptian hieroglyphs. In the underworld, he appeared as an ape, Aani, the god of equilibrium, who reported when the scales weighing the deceased's heart against the feather, representing the principle of Maat, was exactly even.

The ancient Egyptians regarded Thoth as One, self-begotten, and self-produced. He was the master of both physical and moral (i.e. divine) law, making proper use of Ma'at. He is credited with making the calculations for the establishment of the heavens, stars, Earth, and everything in them, giving him a special place in Egyptian astrology.

The Egyptians credited Thoth as creator of the 365-day calendar. Originally, according to the myth, the year was only 360 days long and Nut was sterile during these days, unable to bear children. Thoth gambled with the Moon for 1/72nd of its light (360/72 = 5), or 5 days, and won. During these 5 days, Nut and Geb gave birth to Osiris, Set, Isis, and Nephthys.