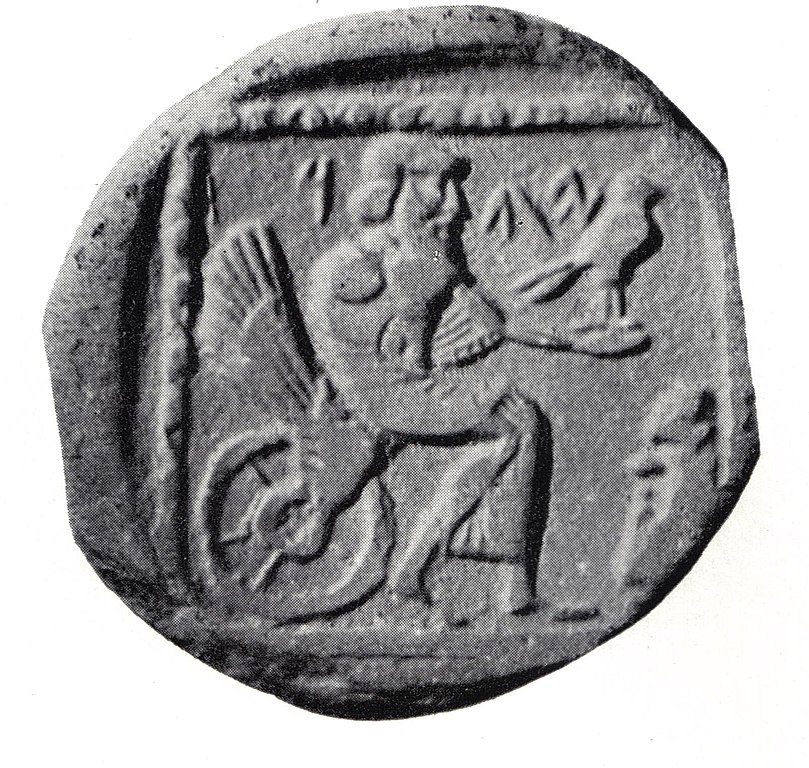 A Phoenician drachm representing Yahweh enthroned on a winged wheel.

Yahweh was the national god of ancient Israel and Judah. His origins reach at least to the early Iron Age, and likely to the Late Bronze Age. In the oldest biblical literature, he is a storm-and-warrior deity who leads the heavenly army against Israel's enemies; at that time the Israelites worshipped him alongside a variety of Canaanite gods and goddesses, including El, Asherah and Baal; in later centuries, El and Yahweh became conflated and El-linked epithets such as El Shaddai came to be applied to Yahweh alone, and other gods and goddesses such as Baal and Asherah were absorbed into the Yahwist religion.

Towards the end of the Babylonian captivity, the very existence of foreign gods was denied, and Yahweh was proclaimed as the creator of the cosmos and the one true God of all the world. During the Second Temple period, speaking the name of Yahweh in public became regarded as taboo; Jews began to substitute the divine name with the word adonai (אֲדֹנָי‬‎), meaning "My Lords" but used as a singular like "Elohim", and after the Temple was destroyed in 70 CE the original pronunciation was forgotten. Outside of early Judaism, Yahweh was frequently invoked in Greco-Roman magical texts from the 2nd century BCE to the 5th century CE under the names Iao, Adonai, Sabaoth, and Eloai.

Ancient Hebrew was written without vowels, so that the god's name is written as 𐤉𐤄𐤅𐤄 (יהוה‎ in Modern Hebrew), transliterated as YHWH; modern scholarship has agreed to represent this as Yahweh. The shortened forms "Yeho-" and "Yo-" appear in personal names and in phrases such as "Hallelujah!" These four letters are called the Tetragrammaton.

This name is not attested other than among the Israelites and seems not to have any plausible etymology. Ehye ašer ehye ("I Am that I Am"), the explanation presented in Exodus 3:14, appears to be a late theological gloss invented at a time when the original meaning had been forgotten.

The centre of Yahweh's worship lay in three great annual festivals coinciding with major events in rural life: Passover with the birthing of lambs, Shavuot with the cereal harvest, and Sukkot with the fruit harvest. These probably pre-dated the arrival of the Yahweh religion, but they became linked to events in the national mythos of Israel: Passover with the exodus from Egypt, Shavuot with the law-giving at Mount Sinai, and Sukkot with the wilderness wanderings. The festivals thus celebrated Yahweh's salvation of Israel and Israel's status as his holy people, although the earlier agricultural meaning was not entirely lost.

His worship presumably involved sacrifice, but many scholars have concluded that the rituals detailed in Leviticus 1–16, with their stress on purity and atonement, were introduced only after the Babylonian exile, and that in reality any head of a family was able to offer sacrifice as occasion demanded. A number of scholars have also drawn the conclusion that infant sacrifice, whether to the underworld deity Moloch or to Yahweh himself, was a part of Israelite/Judahite religion until the reforms of King Josiah in the late 7th century BCE. Sacrifice was presumably complemented by the singing or recital of psalms, but again the details are scant. Prayer played little role in official worship.

Yahweh's role as the national god was reflected each year in Jerusalem when the king presided over a ceremony at which Yahweh was enthroned in the Temple. The Hebrew Bible gives the impression that the Jerusalem temple was always meant to be the central or even sole temple of Yahweh, but this was not the case: the earliest known Israelite place of worship is a 12th century BCE open-air altar in the hills of Samaria featuring a bronze bull reminiscent of Canaanite "Bull-El" (El in the form of a bull), and the archaeological remains of further temples have been found at Dan on Israel's northern border and at Arad in the Negev and Beersheba, both in the territory of Judah. Shiloh, Bethel, Gilgal, Mizpah, Ramah and Dan were also major sites for festivals, sacrifices, the making of vows, private rituals, and the adjudication of legal disputes.

Yahweh-worship was famously aniconic, meaning that the god was not depicted by a statue or other image. This is not to say that he was not represented in some symbolic form, and early Israelite worship probably focused on standing stones, but according to the Biblical texts the temple in Jerusalem featured Yahweh's throne in the form of two cherubim, their inner wings forming the seat and a box (the Ark of the Covenant) as a footstool, while the throne itself was empty.

The worship of Yahweh alone began at the earliest with the prophet Elijah in the 9th century BCE, but more likely with the prophet Hosea in the 8th; even then it remained the concern of a small party before gaining ascendancy in the Babylonian exile and early post-exilic period. The early supporters of this faction are widely regarded as being monolatrists rather than true monotheists; they did not believe Yahweh was the only god in existence, but instead believed he was the only god the people of Israel should worship. Finally, in the national crisis of the exile, the followers of Yahweh went a step further and outright denied that the other deities aside from Yahweh even existed, thus marking the transition from monolatrism to true monotheism.