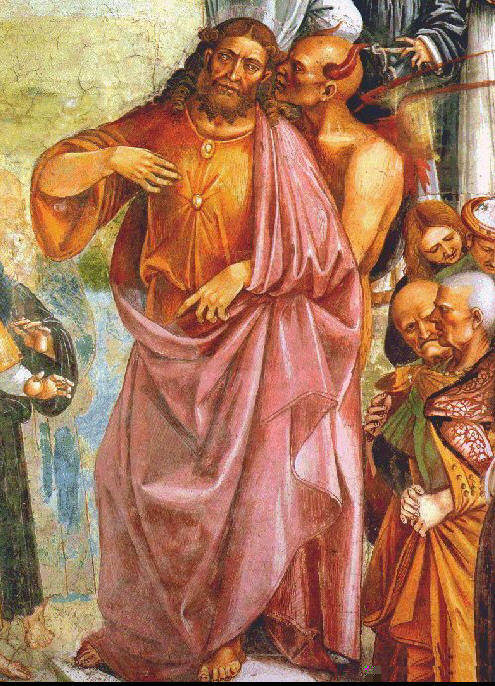 Painting depicting the Devil whispering false prophecies to the Antichrist

A prophet is an individual who is regarded as being in contact with a divine being and is said to speak on behalf of that being, serving as an intermediary with humanity by delivering messages or teachings from the supernatural source to other people. The message that the prophet conveys is called a prophecy.

Claims of prophethood have existed in many cultures and religions throughout history, including Judaism, Christianity, Islam, ancient Greek religion, Zoroastrianism, Manichaeism, and many others.

Prophetic assignment is usually portrayed as rigorous and exacting in the Bible, and prophets were often the target of persecution and opposition. In the First Temple Era, there were essentially seer-priests belonging to a guild, who performed divination, rituals, and sacrifices, and were scribes; and beside these were canonical prophets, who did none of these things (and condemned divination), but came to deliver a message. The seer-priests were usually attached to a local shrine or temple, such as Shiloh, and initiated others into that priesthood, acting as a mystical craft-guild with apprentices and recruitment. Canonical prophets were not organised this way.

In Christianity, a prophet (or seer) is one inspired by God through the Holy Spirit to deliver a message. Some Christian denominations limit a prophet's message to words intended only for the entire church congregation, excluding personal messages not intended for the body of believers; but in the Bible on a number of occasions prophets were called to deliver personal messages. The reception of a message is termed revelation and the delivery of the message is termed prophecy.

The Quran identifies a number of men as "Prophets of Islam." Muslims believe such individuals were assigned a special mission by God to guide humanity. Besides Muhammad, this includes prophets such as Abraham (Ibrāhīm), Moses (Mūsā) and Jesus (ʿĪsā). Muslims often refer to Muhammad as "the Prophet", in the form of a noun.

A false prophet is a person who falsely claims the gift of prophecy or divine inspiration, or to speak for God, or who makes such claims for evil ends. Often, someone who is considered a "true prophet" by some people is simultaneously considered a "false prophet" by others, even within the same religion as the "prophet" in question. In a wider sense, it is anyone who, without having it, claims a special connection to the deity and sets him or herself up as a source of spirituality, as an authority, preacher, or teacher. Analogously, the term is sometimes applied outside religion to describe someone who fervently promotes a theory that the speaker thinks is false.

In the Sermon on the Mount (Matthew 7:15–20), Jesus warns his followers of false prophets:

"Beware of false prophets, who come to you in sheep's clothing but inwardly are ravenous wolves. You will know them by their fruits. Are grapes gathered from thorns, or figs from thistles? So, every sound tree bears good fruit, but the bad tree bears evil fruit. A sound tree cannot bear evil fruit, nor can a bad tree bear good fruit. Every tree that does not bear good fruit is cut down and thrown into the fire. Thus you will know them by their fruits."

The Quran states that Muhammad is the "Seal of the Prophets", which is understood by mainstream Sunni and Shīʿa Muslims to mean that anyone who claims to be a new prophet after him is a false prophet.

Jesus is rejected in every branch of Judaism as a failed Jewish Messiah claimant and a false prophet.