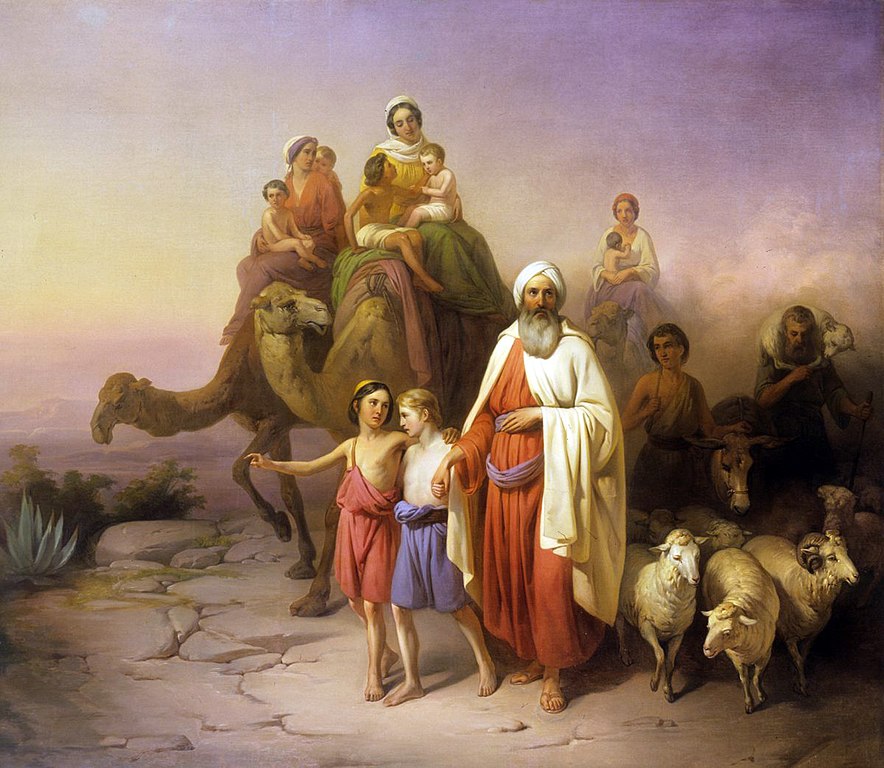 The Abrahamic religions are a group of monotheistic religions that strictly endorse worship of the God of Abraham. These most notably include Judaism, Christianity and Islam, as well as the Baháʼí Faith, Samaritanism, the Druze Faith, and others. The namesake for this group's identity is Abraham, a Hebrew patriarch and prophet who is extensively mentioned in many prominent Abrahamic scriptures, such as the Bible, the Quran, and the Kitáb-i-Aqdas.

Ancient Israelite religion was derived from the ancient Canaanite religion of the Bronze Age, and became firmly monotheistic in the Iron Age, around the 6th century BCE. It survives in two modern forms through the ethnic religions of Judaism and Samaritanism. Christianity split from Judaism in the 1st century CE, and spread widely as a universal religion after being adopted by the Roman Empire as a state religion in the 4th century CE. Islam was founded by Muhammad in the 7th century CE, and also widely spread as a universal religion through the early Muslim conquests. The Bahá'í Faith was founded in the 19th century CE.

The civilizations that developed in Mesopotamia influenced some religious texts, particularly the Hebrew Bible and the Book of Genesis. Abraham is said to have originated in Mesopotamia.

Judaism regards itself as the religion of the descendants of Jacob, a grandson of Abraham. It has a strictly unitary view of God, and the central holy book for almost all branches is the Masoretic Text as elucidated in the Oral Torah. In the 19th century and 20th centuries Judaism developed a small number of branches, of which the most significant are Orthodox, Conservative, and Reform.

Christianity began as a sect of Judaism in the Mediterranean Basin of the first century CE and evolved into a separate religion—Christianity—with distinctive beliefs and practices. Jesus is the central figure of Christianity, considered by almost all denominations to be God the Son, one person of the Trinity. The Christian biblical canons are usually held to be the ultimate authority, alongside sacred tradition in some denominations (such as the Catholic Church and the Eastern Orthodox Church). Over many centuries, Christianity divided into three main branches (Catholic, Orthodox, and Protestant), dozens of significant denominations, and hundreds of smaller ones.

Islam arose in the Arabian Peninsula in the 7th century CE with a strictly unitary view of God. Muslims hold the Quran to be the ultimate authority, as revealed and elucidated through the teachings and practices of a central, but not divine, prophet, Muhammad. The Islamic faith considers all prophets and messengers from Adam through the final messenger (Muhammad) to carry the same Islamic monotheistic principles. Soon after its founding, Islam split into two main branches (Sunni and Shia Islam), each of which now has a number of denominations.

The Baháʼí Faith began within the context of Shia Islam in 19th-century Persia, after a merchant named Siyyid 'Alí Muḥammad Shírází claimed divine revelation and took on the title of the Báb, or "the Gate". The Bab's ministry proclaimed the imminent advent of "He whom God shall make manifest", who Baháʼís accept as Bahá'u'lláh. Baháʼís revere the Torah, Gospels and the Quran, and the writings of the Báb, Bahá'u'lláh, and 'Abdu’l-Bahá' are considered the central texts of the faith. A vast majority of adherents are unified under a single denomination.