Venus is the second planet from the Sun. It is named after the Roman goddess of love and beauty. As the brightest natural object in Earth's night sky after the Moon, Venus can cast shadows and can be visible to the naked eye in broad daylight. Venus lies within Earth's orbit, and so never appears to venture far from the Sun. 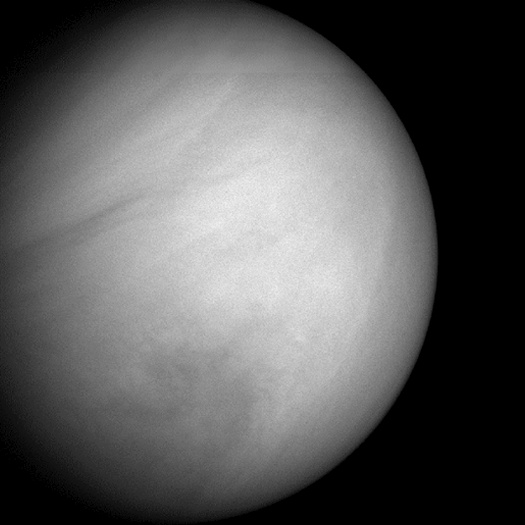 Most of the time, Venus is either a morning star or an evening star, when it rises in the east a little while before dawn or sets in the west just after dusk, respectively. Venus does not have any moons, a distinction it shares only with Mercury among the planets in the Solar System. Venus is a terrestrial planet and is sometimes called Earth's "sister planet" because of their similar size, mass, proximity to the Sun, and bulk composition.

As one of the brightest objects in the sky, Venus has been known since prehistoric times, and as such, many ancient cultures recorded observations of the planet. A cylinder seal from the Jemdet Nasr period indicates that the ancient Sumerians already knew that the morning and evening stars were the same celestial object. The Sumerians named the planet after the goddess Inanna, who was known as Ishtar by the later Akkadians and Babylonians. She had a dual role as a goddess of both love and war, thereby representing a deity that presided over birth and death. One of the oldest surviving astronomical documents, from the Babylonian library of Ashurbanipal around 1600 BC, is a 21-year record of the appearances of Venus.

Venus was considered the most important celestial body observed by the Maya, who called it Chac ek, or Noh Ek', "the Great Star". The Maya monitored the movements of Venus closely and observed it in daytime. The positions of Venus and other planets were thought to influence life on Earth, so the Maya and other ancient Mesoamerican cultures timed wars and other important events based on their observations.

Venus is the ruling planet of Libra and Taurus and is exalted in Pisces. In classical Roman mythology, Venus is the goddess of love and beauty, famous for the passions she could stir among the gods. Her cults may represent the religiously legitimate charm and seduction of the divine by mortals, in contrast to the formal, contractual relations between most members of Rome's official pantheon and the state, and the unofficial, illicit manipulation of divine forces through magic.

Astrologically speaking, Venus is associated with the principles of harmony, beauty, refinement, affections, love, and the urge to sympathize and unite with others. It is involved with the desire for pleasure, comfort and ease. It governs romantic relations, sex (the origin of the words 'venery' and 'venereal'), marriage and business partnerships, the arts and fashion. The 1st-century poet Marcus Manilius described Venus as generous and fecund and the lesser benefic.

Venus rules over Friday and is ruler of second house. Dante Alighieri associated Venus with the liberal art of rhetoric. In Chinese astrology, Venus is associated with the element metal, which is unyielding, strong and persistent. In Indian astrology, Venus is known as Shukra and represents wealth, pleasure and reproduction. In Norse Paganism, the planet is associated to Freyja, the goddess of love, beauty and fertility.