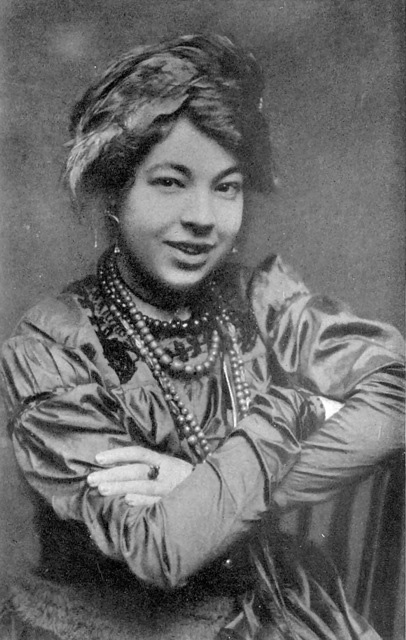 Smith was born at 28 Belgrave Road in Pimlico, part of central London. She was the only child of an American merchant from Brooklyn, New York, Charles Edward Smith (son of Brooklyn mayor Cyrus Porter Smith), and his wife Corinne Colman (sister of the painter Samuel Colman). The family was based in Manchester for the first decade of Smith's life, but they moved to Jamaica when Charles Smith took a job in 1889 with the West India Improvement Company (a financial syndicate involved in extending the Jamaican railroad system). The Smiths lived in the capital, Kingston, for several years, travelling to London and New York.

By 1893, Smith had moved to Brooklyn, where, at the age of 15, she enrolled at the Pratt Institute, which had been founded six years earlier. There she studied art under Arthur Wesley Dow, painter, print maker, photographer, and influential arts educator. Her mature drawing style shows clear traces of the visionary qualities of fin-de-siècle Symbolism and the Romanticism of the preceding Arts and Crafts movement.

While Smith was in art school, her mother died in Jamaica, in 1896. Smith herself was ill on and off during these years and in the end left Pratt in 1897 without a degree. She became an illustrator; some of her first projects included The Illustrated Verses of William Butler Yeats, a book on the actress Ellen Terry by Bram Stoker, and two of her own books, Widdicombe Fair and Fair Vanity (a reference to Vanity Fair).

In 1899 her father died, leaving Smith at the age of 21 without either parent. She returned to England that year, continuing to work as an illustrator, and branching out into theatrical design for a miniature theatre. In London, she was taken under the wing of the Lyceum Theatre group led by Ellen Terry (who is said to have given her the nickname "Pixie"), Henry Irving, and Bram Stoker and traveled with them around the country, working on costumes and stage design. In 1901, she established a studio in London and held a weekly open house for artists, authors, actors, and others involved with the arts. Arthur Ransome, then in his early 20s, describes one of these "at home" evenings, and the curious artistic circle around Smith, in his 1907 Bohemia in London.

In 1903, Smith launched her own magazine under the title The Green Sheaf, with contributions by Yeats, Christopher St John (Christabel Marshall), Cecil French, A. E. (George William Russell), Gordon Craig (Ellen Terry's son), Dorothy Ward, John Todhunter, and others. The Green Sheaf survived for a little over a year, a total of 13 issues.

Discouraged by The Green Sheaf's lack of financial success, Colman shifted her efforts towards setting up a small press in London. In 1904, she established The Green Sheaf Press which published a variety of novels, poems, fairy tales, and folktales until at least 1906, mostly by women writers.[10]

Yeats introduced Smith to the Hermetic Order of the Golden Dawn, which she joined in 1901 and in the process met A.E. Waite. When the Golden Dawn splintered due to personality conflicts, Smith moved with Waite to the Independent and Rectified Rite of the Golden Dawn (or Holy Order of the Golden Dawn). In 1909, Waite commissioned Smith to produce a tarot deck with appeal to the world of art, and the result was the unique Waite–Smith tarot deck. Published by William Rider & Son of London, it has endured as the world's most popular 78-card tarot deck. The innovative cards depict full scenes with figures and symbols on all of the cards including the pips, and Smith's distinctive drawings have become the basis for the design of many subsequent packs. 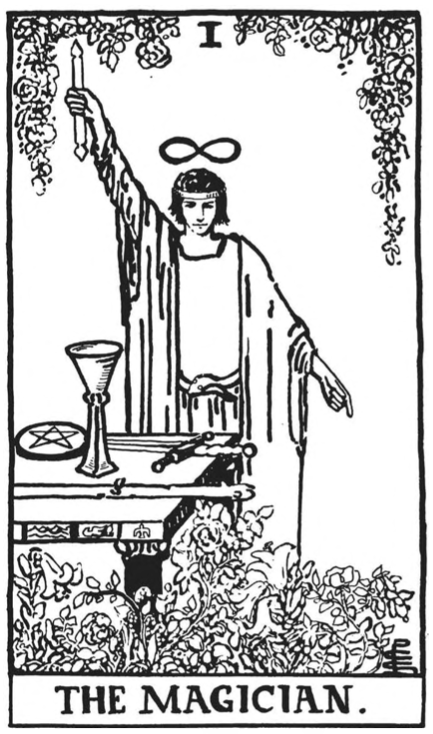 The 78 illustrations that make up the Rider-Waite Tarot deck "represent archetypal subjects that each become a portal to an invisible realm of signs and symbols, believed to be channeled through processes of divination." They are original works of art and unique in terms of the cards' stylization, draftsmanship, and composition, which is a significant aesthetic achievement. They are one of the best examples of Smith's jaw-dropping imagination for fantasy, folly, ecstasy, death, and the macabre.

When Smith's tarot was first published by Rider, in England, in December 1909, it was simply called Tarot Cards and it was accompanied by Arthur Edward Waite's guide entitled The Key to the Tarot. The following year Waite added Smith's black-and-white drawings to the book and published it as The Pictorial Key to the Tarot. In 1971, U.S. Games bought the right to publish the deck and published it under the title The Rider Tarot Deck (because of differences in U.S. and U.K. copyright law, the extent of their copyright in the Waite–Smith deck is disputed). In later editions they changed the name to Rider Tarot and then Rider Waite Tarot. Today most scholars, in order to recognize the importance of Smith's contribution, refer to the deck as the Waite–Smith Tarot. Tarot writers often refer to the deck with the simple abbreviation of RWS, for Rider–Waite–Smith.

In the century since the deck's first printing, there have been dozens of editions put out by various publishers; for some of these the Smith drawings were redrawn by other artists, and for others the cards were rephotographed to create new printing plates. Many versions have been recolored as the coloration is rather harsh in the original deck, due to the limitations of color printing at the time. One example is the 1968 Albano-Waite tarot, which has brighter colors overlaid on the same pen-and-ink drawings. Some recent U.S. Games editions have removed Smith's hand-drawn titles for each card, substituting text in a standard typeface. Altogether, these decks encompass the full range from editions very closely based on the original printings to decks that can at most be termed 'inspired' by the Waite–Smith deck.

Waite is often cited as the designer of the Waite–Smith Tarot, but it would be more accurate to consider him as half of a design team, with responsibility for the major concepts, the structure of individual cards, and the overall symbolic system. Because Waite was not an artist himself, he commissioned Smith to create the actual deck.

It is likely that Smith worked from Waite's written and verbal instructions rather than from sketches; that is, from detailed descriptions of the desired designs. This is how illustrators often work, and as a commercial illustrator, Smith would probably have been comfortable with such a working process. It appears that Waite provided detailed instructions mainly or exclusively for the Major Arcana, and simple lists of meanings for the Minor Arcana or 'pip' cards. Thus the memorable scenes of the Minor Arcana owe largely to Smith's own invention. The Minor Arcana are indeed one of the notable achievements of this deck, as most earlier tarot decks (especially those of the Marseilles type) have extremely simple pip cards. Smith's innovative illustrations for the Minor Arcana, with their rich symbolism, made the Waite–Smith deck a widely imitated model for other tarot decks.

Smith and Waite drew on a number of sources as inspirations for the deck's designs. In particular, it appears that Waite took his inspiration for the trumps mainly from the French Tarot of Marseilles (although the oldest date from the 16th century, his model was possibly a Marseilles deck from the 18th century). It is not unlikely that other Marseilles-type Italian tarot decks from the 18th or 19th century were used as additional models. For the pips, it appears that Smith drew mainly on the 15th century Italian Sola Busca tarot; the Three of Swords, for example, clearly shows the congruity between the two decks. In addition, there is evidence that some figures in the deck are portraits of Smith's friends, notably actresses Ellen Terry (the Queen of Wands) and Florence Farr (The World).

Smith completed the art for the deck in the six months between April and October 1909. This is a short period of time for an artist to complete some 80 pictures (the number claimed by Smith in a letter to Stieglitz in 1909 and corresponding almost exactly to the standard 78-card tarot deck). The illustrations were most likely done in pen and ink, possibly over a pencil underdrawing; the original drawings are lost so this cannot be determined with certainty at present. They were either colored with watercolor by Smith or colored by someone else after the fact.

Apart from book illustration projects and the tarot deck, her art found little in the way of commercial outlets after her early success with Stieglitz in New York. Several examples of her works done in gouache were collected by her cousin, the American Sherlock Holmes actor William Gillette, and may be found today prominently displayed in his castle in Connecticut.

In 1911, Smith converted to Catholicism. After the end of the First World War, Smith received an inheritance from an uncle that enabled her to lease a house on the Lizard Peninsula in Cornwall, an area popular with artists. For income, she established a vacation home for Catholic priests in a neighboring house. Her longtime friend, Nora Lake, joined her in Cornwall and helped to run the vacation home.

After several years of financial difficulty, Smith left the Lizard and relocated first to Exeter in 1939, and then to Bude in the early 1940s. Although she continued writing and illustrating, she was unable to find publishers for her work, likely due to changes in public taste following the First World War. Smith died in her apartment at the Bencoolen House in Bude on 18 September 1951. Her possessions were auctioned off to pay her debts. The location of her gravesite is unknown, but it is likely that she was buried in an unmarked grave in St. Michael's Cemetery in Bude.