Three of Swords from the Rider-Waite Tarot deck

The Three of Swords is the third card in the suit of Swords. It usually stands for removal, absence, and delay. Oppression and worry. Bad news.

In the Rider-Waite Tarot deck, Pamela Colman Smith depicts the Three of Swords as three swords piercing a red heart with a cloud and rain behind.

The Vlad Dracula Tarot uses the Three of Swords to depict the story of Vlad the Impaler nailing the turbans of the Turkish envoys to their heads. In some versions of the story, the envoys were Italian. In either case, assaulting a diplomatic messenger would be considered a serious offense, one that could cause even allied nations to turn against him. 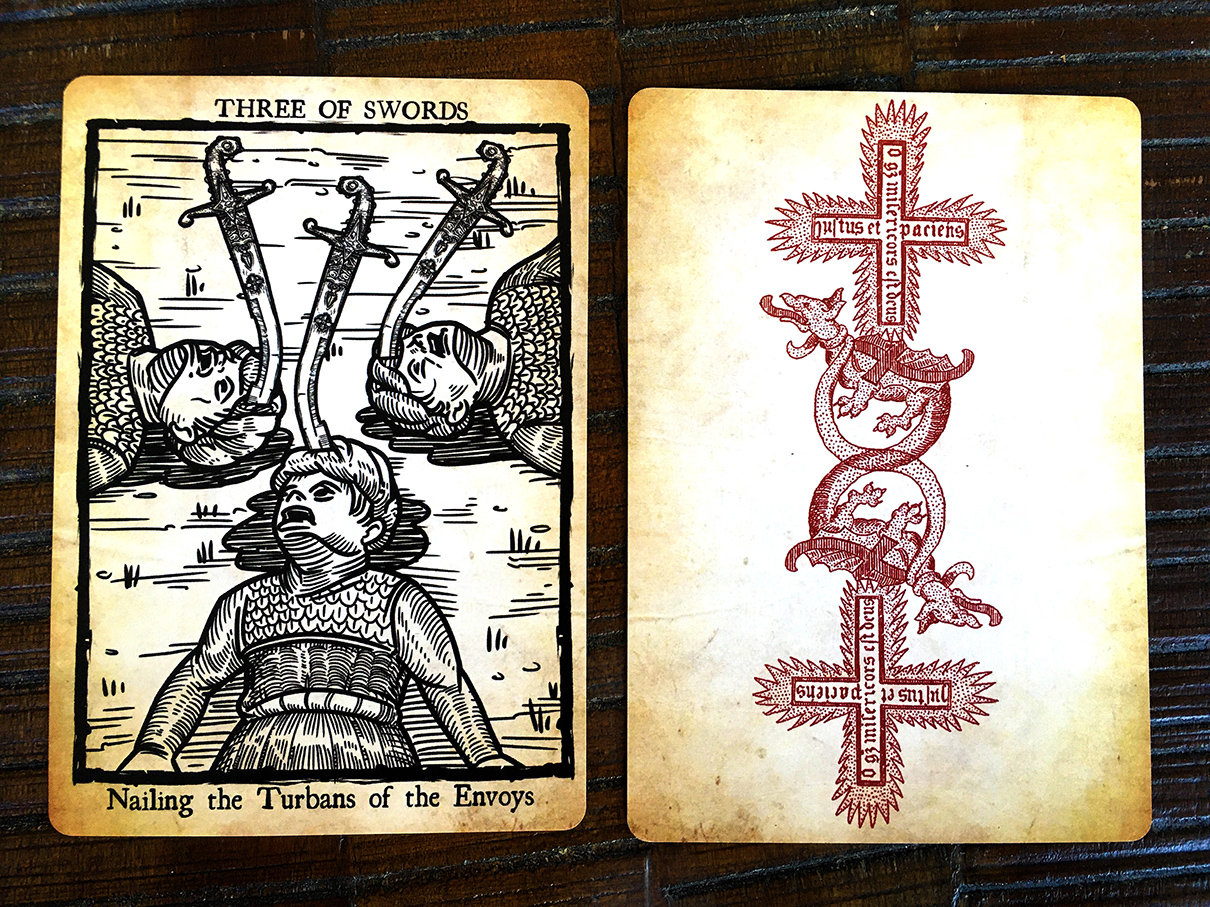 Three of Swords in the Vlad Dracula Tarot

The element of Earth on the Third house acts in the way of the mind and mental processes, and must appear as troubles because it gives the feeling of the mind being burdened, which might easily go as far as oppression. If the burden becomes too heavy, either the body or the soul may suffer severely, and pain, affliction or mental aberration may ensue.

This card may generally mean bad news too, the message which brings news of the affliction. It may be a corrective to a too easy and volatile imagination. It will in most cases denote some sickness, as a result of the pressure or oppressed feeling in the mind or in circumstances in general. It may be the result of worrying. The house of Gemini also suggests some suffering on account of distance, separateness, being far from one other.

The oppressed mind, which cannot have its way, may easily denote the spiritual condition of a nun or some one who takes refuge within the precincts of a monastery. In this case, however, the motives are not of the more elevated or exalted order: there is spitefulness, vexation, bitterness on account of unrealized hopes, want of idealism. So this does not indicate the idealistic type of monasticism. The card typifies the worries of the lesser sort of mind, also small talk, evil thought, the wrestling of the inferior mind with matter and all that may be expected from it.

If reversed, the card can mean: Mental alienation, error, and loss. Also, distraction, disorder, and confusion.