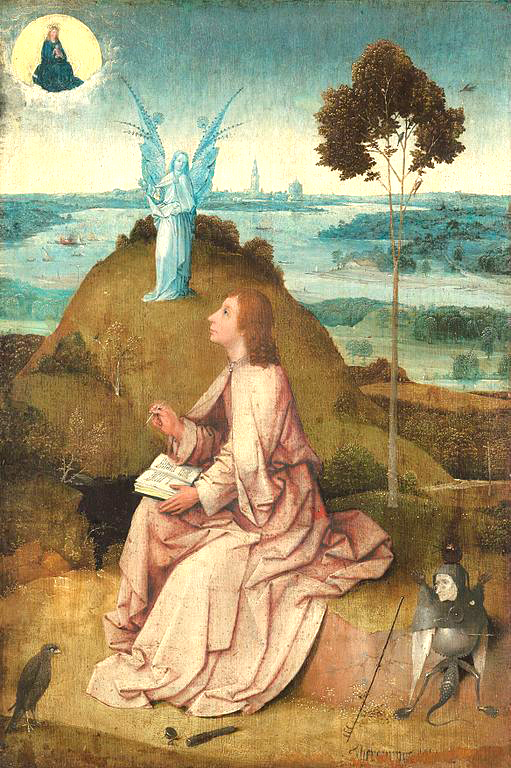 St. John on Patmos as depicted by Hieronymus Bosch

Much of Revelation employs ancient sources, primarily but not exclusively from the Old Testament. The book is commonly dated to about AD 95, as suggested by clues in the visions pointing to the reign of the emperor Domitian. The "beast with seven heads" and the number 666 seem to allude directly to the emperor Nero (reigned AD 54–68), but this does not require that Revelation was written in the 60s, as there was a widespread belief in later decades that Nero would return.

The author names himself as "John", but modern scholars consider it unlikely that the author of Revelation also wrote the Gospel of John. He was a Jewish Christian prophet, probably belonging to a group of such prophets, and was accepted by the congregations to whom he addresses his letter.

Revelation was among the last books accepted into the Christian biblical canon, and to the present day some churches that derive from the Church of the East reject it. Eastern Christians became skeptical of the book as doubts concerning its authorship and unusual style were reinforced by aversion to its acceptance by Montanists and other groups considered to be heretical. This distrust of the Book of Revelation persisted in the East through the 15th century.

There are approximately 300 Greek manuscripts of Revelation and fragmentary quotations in the Church fathers dating to the 2nd to 5th centuries.

Revelation has a wide variety of interpretations, ranging from the simple historical interpretation, to a prophetic view on what will happen in the future by way of God's will and the Woman's (traditionally believed to be the Virgin Mary) victory over Satan ("symbolic interpretation"), to different end time scenarios ("futurist interpretation"), to the views of critics who deny any spiritual value to Revelation at all, ascribing it to a human-inherited archetype.

Modern biblical scholarship attempts to understand Revelation in its 1st-century historical context within the genre of Jewish and Christian apocalyptic literature. This approach considers the text as an address to seven historical communities in Asia Minor. Under this interpretation, assertions that "the time is near" are to be taken literally by those communities. Consequently, the work is viewed as a warning to not conform to contemporary Greco-Roman society which John "unveils" as beastly, demonic, and subject to divine judgment.

Recently, aesthetic and literary modes of interpretation have developed, which focus on Revelation as a work of art and imagination, viewing the imagery as symbolic depictions of timeless truths and the victory of good over evil. Accordingly, Revelation's meaning is partially determined by the way John goes about saying things, partially by the context in which readers receive the message and partially by its appeal to something beyond logic.