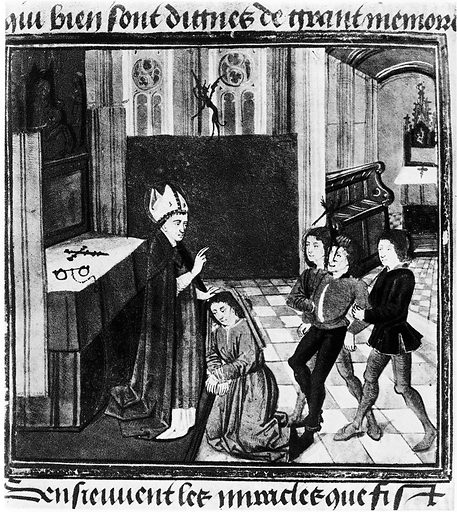 A Bishop exorcising possessed men of their evil spirits

An exorcist is a person who is able to cast out the Devil or performs the ridding of demons or other supernatural beings who have possessed a person, a location, or even an object. The term can also be used to indicate someone who has the ability to manipulate or otherwise control various demons.

In principle, every Christian has the power to command demons and drive them out in the name of Christ, but in a Roman Catholic context, an exorcist is usually a cleric who has been ordained into the minor order of exorcist, or a priest who has been mandated to perform the rite of solemn exorcism.

Since at least the third century, the Latin Church has formally ordained men to the minor order of exorcist. These exorcists routinely performed ceremonies over adults and infants preparing to be baptised. The office of Exorcist was not a part of the sacrament of Holy Orders, but as a sacramental was instead first conferred on those who had the special charism to perform its duties and later to those studying for the priesthood.

By the twentieth century, the order had become purely ceremonial.

The Catechism of the Catholic Church states that: "Jesus performed exorcisms and from him the Church has received the power and office of exorcizing." The 1917 Code of Canon Law explicitly stated that the solemn exorcism of a person believed to be possessed may only be performed with the express authorisation of the local bishop or equivalent.

The Catholic Church's Rite of Exorcism was revised in 1999. Paragraph 13 of its introduction states that a priest can be appointed by the local Bishop either for a single act of exorcism, or to the permanent position of 'exorcist'. The Rite then specifies that whenever it uses the word exorcist without qualification, it indicates a priest mandated in this way.

In many medieval grimoires, the term "exorcist" is used as a title for any ritual magician who is performing sacred rites. This tradition was continued in more modern texts as well, specifically A.E. Waite's The Book of Black Magic and of Pacts and Key of Solomon as translated by Samuel L. MacGregor Mathers in 1888.

The Exorcist is the name of a 1973 American supernatural horror film directed by William Friedkin and written for the screen by William Peter Blatty, based on his 1971 novel of the same name. It was the first installment in The Exorcist film series, and follows the demonic possession of a young girl and her mother's attempt to rescue her through an exorcism conducted by a pair of Catholic priests.

The resulting cultural conversation around the film, which also encompassed its treatment of Catholicism, helped it become the first horror film to be nominated for the Academy Award for Best Picture. It was the highest-grossing R-rated horror film (unadjusted for inflation) until the 2017 release of It. The Exorcist has had a significant influence on popular culture and has received critical acclaim, with several publications regarding it as one of the greatest horror films ever made.

In 2010, the Library of Congress selected the film to be preserved in its National Film Registry, citing it as "culturally, historically, or aesthetically significant."