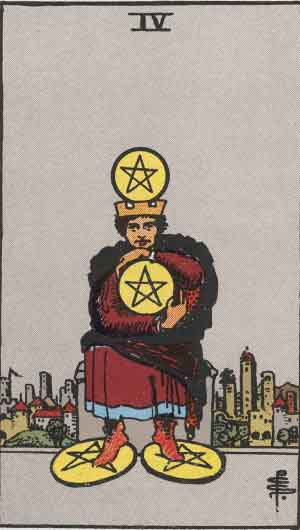 The Four of Pentacles as depicted in the Rider-Waite Tarot deck.

The Four of Pentacles is the fourth card in the suit of Pentacles. It usually stands for cleaving to material possessions, a gift, one's legacy, an inheritance.

In the Rider-Waite Tarot deck, Pamela Coleman Smith depicts the Four of Pentacles as a crowned man, dressed in fine clothing, with a pentacle over his crown, clasping another pentacle with hands and arms; two pentacles are under his feet, both supporting him and ensuring they will not be stolen from underneath him. He holds on tightly to that which is his.

The Four of Pentacles has to do with secrets, the money and possessions of other people, death and sex, inheritance and debt, loans and delay in all material matters, psychic activity, but much hampering in all physical activities—all this makes clear much of what tradition has handed down. Everything falling in this card's house is connected with some secret, which cannot be divulged to the outer world, and consequently in relation to this world these things cannot appear in their full light or significance, are more or less handicapped, meet with obstacles and are wrongly judged. It is related to monastic life indeed. On the other hand it is the psychic and sexual expression of the love born in the heart, and it means, on this account, certainly cleaving to that which one has in a very personal way.

It is the card of desire, attachment, secret longing for possession, which, when not being satisfied, may lead to retreat and retirement. The fire of the heart is here suffering from dissatisfaction or impossibility of realization. It is probably the least favorable card of the pentacles suit, at least in a material sense. It may hold much good for the future, however. Material benefit in this case will never go without some loss or sadness at the same time, as in the case of inheritance.

If reversed, the card can mean: suspense, delay, and opposition.