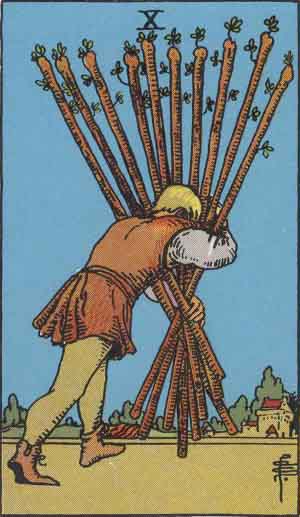 Ten of Wands from the Rider-Waite Tarot deck

The Ten of Wands is the tenth card in the suit of Wands. It usually stands for oppression. It can also indicate fortune, gain, any kind of success, and the oppression of these things. Difficulties and contradictions.

In the Rider-Waite Tarot deck, Pamela Colman Smith depicts the Ten of Wands as a man oppressed by the weight of the ten staves which he is carrying. The place which the figure is approaching may suffer from the rods that he carries.

Actions and deeds, under the influence of the double-natured mercurial element, may easily degrade into double-dealing and everything else of that nature.

So the card on the one hand means certainly that the attitude of mind or action will be untrustworthy and must not be relied upon. There is fear and cowardice in it. But on the other hand the combination is that of mental ability and quick perception. It means also the load of the earthy responsibility laid upon the shoulders of an airy creature, consequently oppression is a word very much to the point here.

This explains even why weaker natures are driven to undesirable, unreliable actions and reactions by it; they cannot stand the pressure. Strong natures, however, accept the pressure as natural necessity, karma, and carry their burden. This is symbolized by the man carrying the ten wands. It is a symbol of executive ability, production, the doing of necessary things, obedience to official order and rule; officials, red tape and burdens that appear heavier than they actually are.

If reversed, the card can mean: Difficulties, intrigues, and treachery.