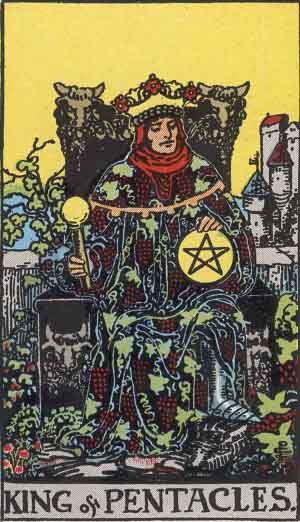 The King of Pentacles is the fourteenth card in the suit of Pentacles. It usually stands for business and normal intellectual aptitude, sometimes mathematical gifts and attainments of this kind. If indicating a person, it will be a rather dark man, a merchant, master, or professor.

In the Rider-Waite Tarot deck, Pamela Coleman Smith depicts the King of Pentacles as a dark figure seated upon a black throne adorned by carvings of bulls. His face suggests courage, but also a somewhat lethargic tendency. The symbol of this suit is represented throughout as engraved or blazoned with the pentagram, typifying the correspondence of the four elements in human nature and that by which they may be governed.

In many old Tarot packs this suit stood for coins or money, but the consensus of divinatory meanings is on the side of some change, because the pentacles cards do not happen to deal especially with questions of money.

The King is the higher octave of the ace, and this particular king heads the cross of fixed signs, so has to do with economy, agriculture, art, vast business, devotional service of the church. The general effect of this card must consequently be to afford protection, and as it shows a very favorable attitude on the part of superiors or influential people, though these will be rather young, or at least, not very old.

The only sort of faults that could be observed in people coming under it would be pride coupled with some vanity, love of pomp, gambling. The Leo-type will naturally dominate the card. Here is a man whom you must go to see and visit, because he will never come to you. He has a widespread influence, which is for the good of everybody who wishes to profit by it, and against which it is hopeless to contend.

If reversed, the card can mean: Vice, weakness, ugliness, perversity, corruption, or peril.